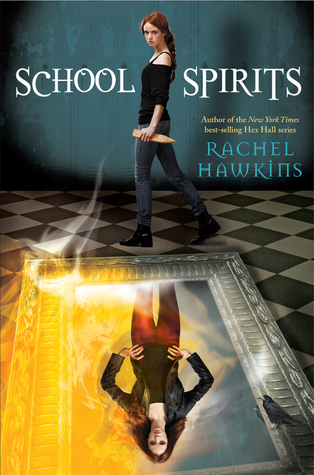 Fifteen-year-old Izzy Brannick was trained to fight monsters. For centuries, her family has hunted magical creatures. But when Izzy’s older sister vanishes without a trace while on a job, Izzy's mom decides they need to take a break.

Izzy and her mom move to a new town, but they soon discover it’s not as normal as it appears. A series of hauntings has been plaguing the local high school, and Izzy is determined to prove her worth and investigate. But assuming the guise of an average teenager is easier said than done. For a tough girl who's always been on her own, it’s strange to suddenly make friends and maybe even have a crush.

Can Izzy trust her new friends to help find the secret behind the hauntings before more people get hurt?

I had heard many people saying that this had nothing to do with Hex Hall whatsoever, even though it was a spin-off, so I knew going in that there would be none of the characters I loved so much from Rachel’s first trilogy. And they were right – Sophie was only mentioned twice in passing – but that’s okay. I still enjoyed the world! And while it didn’t quite hold the magic that Hex Hall did, it was still a cute read.

I suppose it could have been much better if I had blocked Hex Hall completely from my mind. But I couldn’t help it! This one was much more juvenile than Hex Hall – in fact, it read a bit closer to Middle Grade than Young Adult. Which I suppose reflects on Rachel Hawkins’ talent as a writer, because you could tell the age difference between reading Sophie’s POV (in Hex Hall) and Izzy’s. Izzy was much younger, and as a result, read younger. So it wasn’t necessarily a negative thing.

I still liked her, though! Despite being a bit naive (again, an age thing), she had a strong voice and a quick wit. I was glad to see that sense of humor make a return in the spin off series! I found Izzy’s innocence endearing, and her monologue about her kissing worries cracked me up. I look forward to more of her point of view in the next book!

As soon as Dex came into the story, I kind of loved him already. He was quirky and a little nerdy, but he was sincere and stayed true to himself no matter what. The romance between Dex and Izzy was adorable and realistic and I found myself wanting them to end up together despite their ‘just friends’ mantra!

The surprise at the end didn’t shock me quite as much as it probably should have, but it was a nice twist. This book was a light, fluffy read, and I recommend giving it a try!

That was as far as Mom had gotten in her Facts of Life talk a few years back: “Don’t let boys touch you in the bathing suit zone.” Then the warlock she and Finn had been chasing chose that moment to leap onto the hood of our car, and the rest of her talk had gone unfinished.

“You’ve completely cracked.”
Scowling, Torin folded his arms over his chest. “You know I don’t appreciate mirror jokes.”
Doing my best to look contrite, I picked up my backpack. “I’m sorry, Torin. I’ll try to reflect on my actions.”