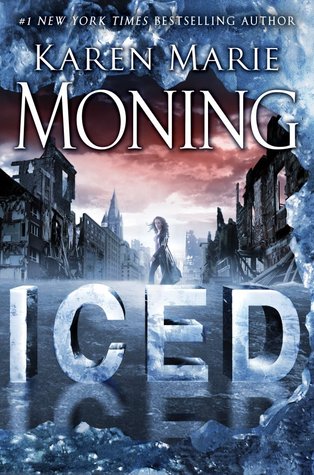 The year is 1 AWC—After the Wall Crash. The Fae are free and hunting us. It’s a war zone out there, and no two days are alike. I’m Dani O’Malley, the chaos-filled streets of Dublin are my home, and there’s no place I’d rather be.

Dani “Mega” O’Malley plays by her own set of rules—and in a world overrun by Dark Fae, her biggest rule is: Do what it takes to survive. Possessing rare talents and the all-powerful Sword of Light, Dani is more than equipped for the task. In fact, she’s one of the rare humans who can defend themselves against the Unseelie. But now, amid the pandemonium, her greatest gifts have turned into serious liabilities.

Dani’s ex–best friend, MacKayla Lane, wants her dead, the terrifying Unseelie princes have put a price on her head, and Inspector Jayne, the head of the police force, is after her sword and will stop at nothing to get it. What’s more, people are being mysteriously frozen to death all over the city, encased on the spot in sub-zero, icy tableaux.

When Dublin’s most seductive nightclub gets blanketed in hoarfrost, Dani finds herself at the mercy of Ryodan, the club’s ruthless, immortal owner. He needs her quick wit and exceptional skill to figure out what’s freezing Fae and humans dead in their tracks—and Ryodan will do anything to ensure her compliance.

Dodging bullets, fangs, and fists, Dani must strike treacherous bargains and make desperate alliances to save her beloved Dublin—before everything and everyone in it gets iced.

Oh my GAWD, where do I even start? First off, Karen is my FAVORITE. AUTHOR. EVEERRRRR. Seriously, guys. She could probably write a book about paint drying and I’d love the crap out of it. She has a fabulous talent for writing riveting stories. Iced was no different! It gives me peace of mind to go into a story knowing for sure that I’ll every minute of it.

“You’ll never be just anything, Dani. A tsunami can never be ‘just’ a wave. Waves are banal. Tsunamis reshape the Earth. Under the right circumstances, even entire civilizations.”

I love Dani! While I don’t condone what she did – and yes, I lost a bit of respect for her because of it – I still love her to pieces. She’s stubborn, headstrong, and opinionated (qualities I see in myself, haha), not to mention arrogant and fiery. And totally kick-ass! She’s one of my favorite heroines. I enjoyed reading from her perspective instead of Mac’s for a change (not that I don’t love Mac, too).

Ryodan. Oh, Ryodan. It was like going through the Barrons/Mac banter all over again. You gotta love him, but at the same time you want to brain him for being such an arrogant prick. He sure knew how to get under skin! Especially Dani’s. But she gave it right back, of course.

Christian’s part was…er, interesting. He was a little disturbing and creeptastic at times, but endearing in his affection (despite being a bit twisted) for Dani.

“Dani, Dani, Dani. Don’t fight me. You don’t need to fight me. I’ll never hurt you. Not you. You’re my brightest shining star.”I ain’t nobody’s bright shiny nothing! He’s a certifiable lunatic!

I had trouble getting a handle on him, and at times he gave off the creepy-stalker-vibe, but in the end he won me over with what he did for Dani.

It was awesome to finally meet Dancer! I would love to delve deeper into the world of Dancer, because I feel like there’s more to him than meets the eye. I want to know what his story is! I also can’t wait to see how things play out between Mac and Dani. I neeeeed to know! Gah!!

The world building was stupendous as always! I found it so easy to picture everything just like it was a movie playing in my head. Even the monstrous baddies. There was plenty of danger and action, with a touch of mystery mixed in from the ‘icings.’ The Crimson Hag – totally disturbing! In the scenes where she made an appearance I was horrified yet engrossed. And the Hoar Frost King – creepy! The villains were scary and imposing, I loved it!

Something else I love about KMM’s writing – the humor! Her books never fail to make me laugh out loud at the witty sarcasm!

Rule #1 in the Universe: the crap always hits the fan. It’s the nature of crap. It’s a fan magnet.

I figure if there is a God, he or she isn’t paying attention to what we build or if we follow some elaborate rules, but copping a ride on our shoulders, watching what we do every day. Seeing if we took this great big adventure called life and did anything interesting with it.

Click cover for Goodreads or my review if there is one.