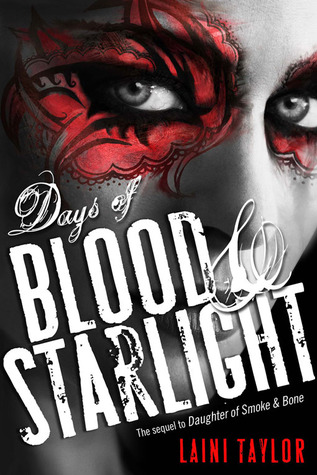 Once upon a time, an angel and a devil fell in love and dared to imagine a world free of bloodshed and war.

This is not that world.

Art student and monster's apprentice Karou finally has the answers she has always sought. She knows who she is—and what she is. But with this knowledge comes another truth she would give anything to undo: She loved the enemy and he betrayed her, and a world suffered for it.

In this stunning sequel to the highly acclaimed Daughter of Smoke & Bone, Karou must decide how far she'll go to avenge her people. Filled with heartbreak and beauty, secrets and impossible choices, Days of Blood & Starlight finds Karou and Akiva on opposing sides as an age-old war stirs back to life.

While Karou and her allies build a monstrous army in a land of dust and starlight, Akiva wages a different sort of battle: a battle for redemption. For hope.

But can any hope be salvaged from the ashes of their broken dream?

I am a priestess of a sandcastle in a land of dust and starlight.

I don’t even know where to start! This book rocked my socks off, guys. It was just as good as (if not better than) Daughter of Smoke and Bone. Laini’s writing is dark and beautiful and paints a vivid picture of her stunning world. Days of Blood and Starlight enchanted me!

I love Karou! I liked her even more in this book because you get to see more of her depth and background. I really felt for her because of the suffering she had to go through, and how she was an outsider to the Chimaera.

We also get more of Zuzana. I loved her for her friendship towards Karou! It is everything a friendship should be, and I feel we don’t see enough of that in YA because it gets lost in the focus on romance. She was brave in the face of danger to stick with Karou through thick and thin, just when she really needed it. And I loved her fiery personality! I thought it was funny (and fitting) that the Chimaera called her neek-neek, after ‘a growlsome breed of shrew-scorpion known for facing down predators ten times its size.’ It was awesome!

Once upon a time, an angel and a devil fell in love and dared to imagine a new way of living…

Karou and Akiva. Such a distraught and beautifully tragic relationship. They went through so much, only to be torn apart when they needed each other most. Their separation broke my heart! I understand Karou’s loathing for him, but can he really be blamed? I was kind of on the fence on that one. It was hard not to feel as Karou did, but at the same time, I still felt for Akiva. Especially after everything he did for her and her people, whether she knew about it or not.

All of the characters were complex and realistic with their own personalities. I enjoyed meeting Ziri, and while I’m still Team Akiva despite what he did, I was glad that Karou had somebody there for her. I hated Thiago. He was manipulative and calculating, and his need to control Karou made me bristle. Not to mention what he almost did to her. He deserved what happened to him!

I feel the need to revisit Laini’s magnificent prose. Her writing is captivating and engaging, provoking vast feeling in you as a reader. She a way with words that not many other writers have (like Karen Marie Moning and Lauren Oliver), and it kept me enthralled every moment of the way, greedily gobbling up every word. I am seriously looking forward to the conclusion of the trilogy! Wish we didn’t have to wait so long!

“Dead souls dream only of death. Small dreams for small men. It is life that expands to fill worlds. Life is your master, or death is.”


He had life, and life wasn’t a default state – I am not dead, hence I must be alive – but a medium. For action, for effort. As long as he had life, who deserved it so little, he would use it, wield it, and do whatever he could in its name, even if it was not, was never, enough. 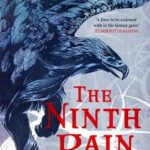