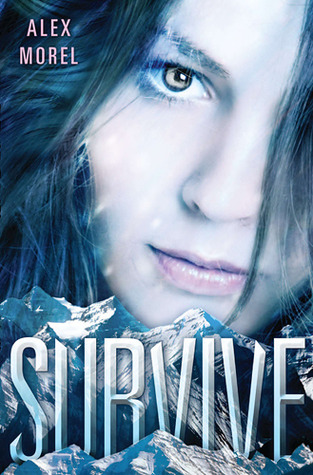 Jane is on a plane on her way home to Montclair, New Jersey, from a mental hospital. She is about to kill herself. Just before she can swallow a lethal dose of pills, the plane hits turbulence and everything goes black. Jane wakes up amidst piles of wreckage and charred bodies on a snowy mountaintop. There is only one other survivor: a boy named Paul, who inspires Jane to want to fight for her life for the first time.

Jane and Paul scale icy slopes and huddle together for warmth at night, forging an intense emotional bond. But the wilderness is a vast and lethal force, and only one of them will survive.

This book was good, not great, but was a quick and easy read. There wasn’t a lot of depth to it, though, despite the tough issues involved.

The fact that it was so short kept things flowing at a decent pace, so I didn’t really get bored. But I didn’t get the heart-pounding, edge-of-my-seat action I was expecting in a book like this. I expected it to be heart wrenching and desperate, but I couldn’t connect like I wanted to. I felt little to no emotion while reading Survive, just an overall feeling of ‘meh.’ I wanted way more suspense and riveting action.

Something I did feel? Irritation for Jane. She was a bit of a vapid protag, and I wanted to brain her already within the first chapter of meeting her. My first thought was, What happened to her? What’s so terrible in her life that she feels the need to end it? And I was expecting tragedy…which was true. Because her father was dead. But he killed himself. Really? Your father took his life and made your existence miserable, and you’re really thinking about doing the exact same thing? What a selfish, ignorant hypocrite. She’d just be inflicting that pain that she felt on everyone she cared about.
Deceiving my friends and doctors isn’t devious or selfish; it’s just pragmatic and necessary to achieve my goal.
Sounds pretty selfish to me.

She also kept going on about how suicidal tendencies ran in the family – like just because they did it, she feels an obligation to carry on the family tradition.
At the time of my first incident, I desired the specialness their lives took on after they offed themselves, how everyone talked endlessly about their struggles and dramatic ends.
Jesus, as if killing yourself is honorable or something. And it made it sound like she just wanted attention.

In the beginning, I despised her. But I guess that’s kind of the point, isn’t it? There was a clear development of her character, and a moral learned by the end. That was honestly the best part of the story. Because at first, Jane had no appreciation for life and wanted to ‘hit the switch’ as she called it, and when she was suddenly fighting for her life, she realized she didn’t actually want to die. She was grateful to be alive.
I can’t say I liked her at the end necessarily, but she definitely improved.

One response to “Review: Survive by Alex Morel”