« Christmas in July Giveaway Hop!
DNF review: Between the Sea and Sky by Jaclyn Dolamore »
Posted by Jessi (Geo) on July 9, 2012 | 1 Comment

Cheerleader Isobel Lanley is horrified when she is paired with Varen Nethers for an English project, which is due—so unfair—on the day of the rival game. Cold and aloof, sardonic and sharp-tongued, Varen makes it clear he’d rather not have anything to do with her either. But when Isobel discovers strange writing in his journal, she can’t help but give this enigmatic boy with the piercing eyes another look.

Soon, Isobel finds herself making excuses to be with Varen. Steadily pulled away from her friends and her possessive boyfriend, Isobel ventures deeper and deeper into the dream world Varen has created through the pages of his notebook, a realm where the terrifying stories of Edgar Allan Poe come to life.

As her world begins to unravel around her, Isobel discovers that dreams, like words, hold more power than she ever imagined, and that the most frightening realities are those of the mind. Now she must find a way to reach Varen before he is consumed by the shadows of his own nightmares.

His life depends on it.

I felt that this book was much too long for the content. It dragged on a bit for me, and I think if some of the filler had been cut out, I would have enjoyed it a lot more. There wasn’t much at all happening for the first ¾ of the book (and seeing as how it’s 500+ pages long, that’s a lot), just an occasional creeptastic part to pique my interest and make me wonder what would happen. I wasn’t all that bored, but I didn’t get really interested until Varen and Isobel presented their project on Poe. That part made me laugh out loud, so I felt more engaged in the story after that.

I never read much Poe, just The Raven as high school required reading. Maybe I would have understood this book a little more if I had. I didn’t even know what was supposed to be happening until the last quarter (not gonna lie, I didn’t really read the whole synopsis). That’s when things finally started picking up and sh*t got freaky. I liked the strange and twisted occurrences, but it mostly left me confused. I didn’t understand a lot of the dream world. Like, who is Pinfeathers to Varen? And what motive did Reynolds have?

Isobel was pretty cool – for a cheerleader, ha. She never did anything to irritate me, which is commendable in a female lead! I was able to relate to her fairly well.
I really liked Varen! First sight (in my mind) had me hooked – he has a lip ring, ahh! So, so sexy. He has black hair (more sexy), and wears black (I love the rebel bad boy look). He was kind of a pain in the arse sometimes (stoic, sullen, and eternally morose as Isobel puts it), but the few of the romantic moments made my heart beat faster. I liked that things progressed slowly between Varen and Isobel. It wasn’t too gushy or lovey-dovey, which is what I like in a romance.

Most of this book dragged, but there were a few parts where I was absolutely riveted. Sadly, they were few and far between, but it was somehow enough to keep me interested (for the most part, anyway).

Favorite character: Probably Gwen. Her enthusiasm made it hard not to like her!

“It is naught but pain and regret when we think of the things and people we will never have, the opportunities we may never get. But to pine for those we have had and loved and once held but will never clasp again, it is a torture of an unbearable degree. It is the worst pain possible. Enough to drive you away from yourself.”

“You’re really a blond,” she said, her tone just short of accusatory.
“And if you tell anyone, I will come to you in the night and smote your everlasting soul.” 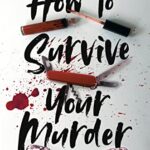 One response to “Review: Nevermore by Kelly Creagh”