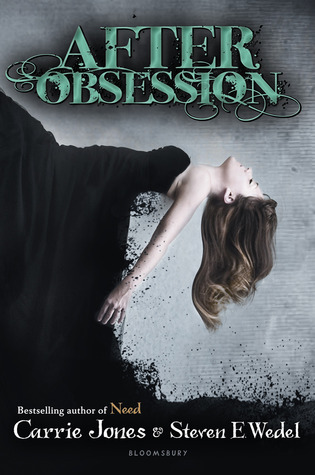 Aimee and Alan have secrets. Both teens have unusual pasts and abilities they prefer to keep hidden. But when they meet each other, in a cold Maine town, they can't stop their secrets from spilling out. Strange things have been happening lately, and they both feel that something-or someone- is haunting them. They're wrong. Despite their unusual history and powers, it's neither Aimee nor Alan who is truly haunted. It's Alan's cousin Courtney who, in a desperate plea to find her missing father, has invited a demon into her life-and into her body. Only together can Aimee and Alan exorcise the ghost. And they have to move quickly, before it devours not just Courtney but everything around her.

Filled with heart-pounding romance, paranormal activity, and rich teen characters to love-and introducing an exciting new YA voice, Steven Wedel-this novel is exactly what Carrie Jones fans have been waiting for. Meet your next obsession.

Carrie’s writing skills have really improved since she wrote Need. I didn’t care for that one, but this one was pretty darn good! Dark and haunting – it definitely had the creep factor. It was a quick read and went smoothly. The descriptions were great but not too lengthy, I was able to get a good picture in my head without getting bored. I think this would make a great movie!
I liked that it switched back and forth between Aimee and Alan. It gave me a good idea of what they were both thinking and feeling and I was able to get to know them both instead of just focusing on one character. It made their emotions more personal.
I loved Alan. L-O-V-E-D. Why aren’t there guys like that in the real world? He was hot, like smokin’ drool-worthy HAWT (hint: I pictured him as Taylor Lautner), but still had a sensitive side and was thoughtful, and yes, chivalrous! Sigh, commence mental swooning. Between books and Disney, it’s no wonder our expectations are set so high, right ladies?
Aimee was a solid and strong protag. I didn’t think she was spectacular, but I didn’t have any complaints about her either. Okay, I lied, there was one at the beginning – where she met Alan and called him “the guy of her dreams,” yet she had only had one dream about him that you as the reader knew about. I would have liked to have seen a little more of the dreams before the actual meeting.
Other than that, I was very satisfied with the romance building between her and Alan. It didn’t move too quickly (because nobody likes an instaluv), and at parts I was like, “Oh for heaven’s sake, just kiss her already!!!” I like it when a story makes me really want it to happen because of all the waiting, it makes it so much sweeter when a little action finally does happen.
The only complaint I had was the whole ‘feeling sparks when they touch.’ Come on, really? What a horrible cliche. That doesn’t even happen in real life. Either that or I have seriously been with all the wrong guys…

One response to “Review: After Obsession by Carrie Jones”