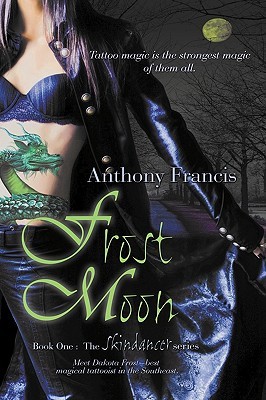 In an alternate Atlanta where magic is practiced openly, where witches sip coffee at local cafes, shapeshifters party at urban clubs, vampires rule the southern night like gangsters, and mysterious creatures command dark caverns beneath the city, Dakota Frost's talents are coveted by all. She's the best magical tattooist in the southeast, a Skindancer, able to bring her amazing tats to life. When a serial killer begins stalking Atlanta's tattooed elite, the police and the Feds seek Dakota's help. Can she find the killer on the dark fringe of the city's Edgeworld? Among its powerful outcasts and tortured loners, what kind of enemies and allies will she attract? Will they see her as an invader, as a seducer, as an unexpected champion ... or as delicious prey?

FROST MOON is Book One of the SKINDANCER fantasy series by debut author Anthony Francis. Filled with unforgettable characters, spine-tingling action, kinky rebellion and edgy love, FROST MOON is classic storytelling at its best, and Dakota Frost is an irresistible new star of fantasy fiction.

In the first 80 pages or so, I was thinking about putting this one down. Boy, am I glad I didn’t! In the beginning, I really didn’t care for it because of several reasons:

1) The cursing. The F word was in almost every other sentence. I have absolutely no problem with a little foul language, but I feel it was a bit excessive at times.
2) It seemed a bit like a male’s wet dream complete with lesbian bondage and S&M. Sooo not my thing. Thankfully it was just one scene, and didn’t really go into detail. But I was still a little disturbed.
3) Too many possible love interests. It seemed like everyone, male and female alike, was interested in Dakota (she’s bi). And likewise, she was sizing up men left and right with no bias. There were so many that I couldn’t even keep track.
4) The street names, GOOD LORD. I felt assaulted with street and building names as well as directions. I really could care less how to get to someplace in a book. Seriously. My attention span was suffering, and I ended up skimming most of these parts because I didn’t feel like reading all of the names.

But then it picked up at the werehouse, where Dakota first demonstrates her magical tattoos. The idea of tattoos coming to life – aka skindancing – is positively fascinating to me, so my interest was piqued. Then, all of the werekin. I am a huge fan of anything were, and this one had them aplenty – werewolves, werecats, weretigers,  werestags, and even, yes! a werebear. After that, I was hooked.

Dakota was an okay protag, although she came off a bit skanky in the beginning. After she finally stuck on one guy she wasn’t so bad – and romance really took a back burner after the first half. She wasn’t all that strong, she has her magic but when that is gone she’s just a very tall and weak woman who can’t defend herself. But she still had kick-ass aspects: the magical tattoos that come to life with her mana, her no-nonsense attitude, and deathhawk. That’s right – a full mohawk that went all the way down her back. Bad ass!

Favorite character: Cinnamon! First of all, she’s a weretiger. Second of all, she reminds me of this character, from my favorite anime: 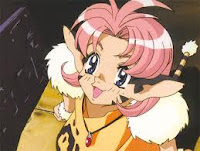 Merle!!
Young and stubborn and a bit fiesty. I’ll love you forever if you know what anime it is.  :D