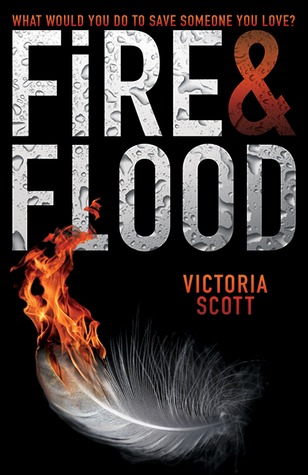 Tella Holloway is losing it. Her brother is sick, and when a dozen doctors can't determine what's wrong, her parents decide to move to Montana for the fresh air. She's lost her friends, her parents are driving her crazy, her brother is dying—and she's helpless to change anything.

Until she receives mysterious instructions on how to become a Contender in the Brimstone Bleed. It's an epic race across jungle, desert, ocean, and mountain that could win her the prize she desperately desires: the Cure for her brother's illness. But all the Contenders are after the Cure for people they love, and there's no guarantee that Tella (or any of them) will survive the race.

The jungle is terrifying, the clock is ticking, and Tella knows she can't trust the allies she makes. And one big question emerges: Why have so many fallen sick in the first place?

This book reminded me a lot of a cross between The Hunger Games and The Golden Compass! I don’t particularly like to compare books, because that usually insinuates that one is a cheap ripoff of another, but that was not the case with Fire & Flood. Yes, it was similar; but Victoria Scott made it her own, and it was a unique and intriguing read!

The egg is small and ugly, and if I’m not mistaken, it’s got a little stank rolling off it. But it’s mine. And I’m going to take care of what’s inside.

So, let me just take a minute to fangirl over Madox. Scott could have picked any animal, and she picked a fox. Did I mention that I freaking adore foxes?! *nods appreciatively to Victoria Scott* MADOX WAS SO AWESOME CAN I PLEASE HAVE ONE PLEASE CAN I PLEASE?! Seriously, I loved him so much!!! I felt a very keen affection for him, the kind that rarely happens for me with fictional characters. I want my own Pandora!! Especially if it’s as cute and badass as Madox! He was what made the story for me. That, and the idea of Pandoras in general. Think The Golden Compass‘ demons, only they’re not part of the person. They’re hatched. From an egg. And they each have their own unique abilities. How awesome is that?!

I loved the journey Tella took in finding the egg and being with it when it hatched. I loved that despite the fact that the egg seemed damaged and hatched late, Madox was adorable and ended up being the best Pandora of them all. I loved finding out what his power really was!! I pretty much just loved everything related to Pandoras, haha.

At first, Tella kind of annoyed me. She seemed rather spoiled, vain, and kind of shallow in the beginning; but as the plot progressed, I could see a clear change in her. She ended up being pretty awesome! I found her protectiveness over Madox – even before he hatched – endearing. While most people may have given up on the egg, or tossed it away because they deemed it defective, she clung to it and loved it despite its misgivings, and was rewarded for that!

I liked the secondary characters, too. Jaxon intrigued me and Harper was a badass! I really liked Harper for some reason, and hope to see more of her in the next book.

I have to give kudos to Scott, because one part in the story shocked the hell out of me! I didn’t see that twist coming at all, and these days it’s hard to surprise me. With as much fiction as I watch/read, I can usually predict things pretty easily. I love it when an author can catch me by surprise!

The idea of it was pretty cool, although I found it a little strange in the beginning because it kinda came out of nowhere. But the farther it went, the more interesting it was. I would love to get a little more world building in the second book, because I want to know more about the Brimstone Bleed and its origins! I can’t wait for the next book!