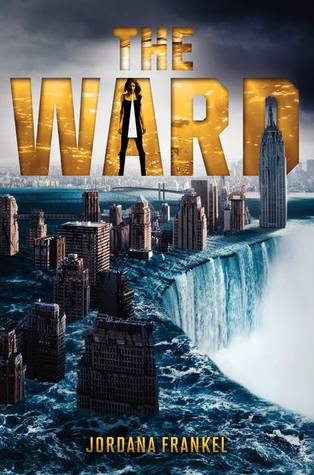 Sixteen-year-old Ren is a daredevil mobile racer who will risk everything to survive in the Ward, what remains of a water-logged Manhattan. To save her sister, who is suffering from a deadly illness thought to be caused by years of pollution, Ren accepts a secret mission from the government: to search for a freshwater source in the Ward, with the hope of it leading to a cure.

However, she never expects that her search will lead to dangerous encounters with a passionate young scientist; a web of deceit and lies; and an earth-shattering mystery that’s lurking deep beneath the water’s rippling surface.

Jordana Frankel’s ambitious debut novel and the first in a two-book series, The Ward is arresting, cinematic, and thrilling—perfect for fans of Scott Westerfeld or Ann Aguirre.

Besides Taken, this was my most anticipated debut of 2013. Did it disappoint? It surely did not! There was plenty of action, and once this book grabs you it doesn’t let go.

I positively LOVED the setting! There are not nearly enough futuristic stories that take place over the water. The idea of a future where Manhattan is almost entirely underwater is fascinating to me. And something cool came from all that water: Roofracing.
Now, I tried not to think too hard about the logistics of this, because I’m not exactly sure how it would work. And to be honest, in some of the racing scenes I had some trouble keeping up with what was happening. But the idea of it is SO AWESOME. Jumping from roof to roof in a race? It sounds thrilling, death-defying!
But as I said, you can’t think too much into it. Because then you start wondering things like how the mobiles could possibly survive the impact, how they could make the distance without flight. Or how it’s physically possible to drive down the side of a building.

I liked Ren. Can’t say that I loved her, and I didn’t feel a deep connection with her, but she was a solid lead. She was stubborn, strong, defiant. But the main reason I liked her was because of Aven. Ren was willing to do just about anything for the girl, and basically everything she did was for Aven. The racing, the risks, being a mole (which she despises). All to support Aven. The dedication for her sick sister was one of the driving points of this novel.

Aven was a fabulous character! She was sweet and innocent, a small pocket of light within the dark and corrupted world. But I have to say that Callum was my favorite. I don’t know why I loved him so much, but I just did. In fact, I may or may not have shipped Ren and Callum… >.>
Don’t get the wrong idea, though. There wasn’t a love triangle, no worries. (In fact, romance took a backseat to everything else going on) It was just me adoring Callum to the point that I wish Ren had been interested in him instead.
Not that I didn’t like Derek…I did. Mostly. He had some issues, and sometimes his agenda was a bit shady. I didn’t always know what side he was on. But something he did for Ren toward the end – something pretty incredible – made me rethink how I had started feeling about him. Guess he wasn’t so bad, after all.

I hated Kent. And Kitaneh. But mostly Kent. He was such an asshat!! He made me automatically think of Kevin Durand, who almost always plays a scumbag part. And Governer Voss….I don’t really know what to think of him. He was slimy for the most part, but he had his moments. And I wonder if he only acted the way he did because someone he cared about was sick.

While I thoroughly enjoyed the story, there were a few things that really bothered me in the beginning that caused me to struggle a bit at first.
1) Ren fell fifteen stories onto the next roof and was ‘cushioned by the water pooling there.’ No. Just no. Anybody with any common sense knows that hitting water from such a great distance is basically like hitting concrete.
2) She passes out – underwater. The next paragraph: Air hunger forces my eyes open. My body heaves, convulses. I ignore the need to open my mouth. How long was I out?
Um? When you pass out, your body automatically starts breathing again. You can’t hold your breath while you’re unconscious. Ergo, if underwater, you would drown. I just can’t believe anyone would make this mistake.
3) At one point Ren was inside a building, 15 stories underwater. And there were no leaks. How? Because the windows were ‘bricked up?’ I’m not entirely sure that would actually seal anything. Unless the building had some kind of special sealant, the entire thing would be flooded. I suppose the idea was cool, but it just didn’t make sense to me.
4) This: Now for some dry fabric. I start opening all the doors on this level, hoping that one of them is a closet. When I find one with a few coats, I toss a whole pile of musty, moth-eaten fabric to the ground and light the corners on fire. I’m not worried about the building burning down – everything here is damp from tide fluctuations.
Anybody else see the contradiction in there?

I would have loved to know more about the government. What exactly does the DI – Division Interial – do? Why were they made? They were mostly just faceless, scary authority. And what about the Blight? I think there was mention of it being cancer-like, but what causes it? How did it develop? Thankfully I was able to get a guesstimation of the year: Somewhere around 3010. Sweeeeet.

Because of those things, the beginning was a little rocky for me. But after the first quarter or so, things picked up and I was engrossed. It grabbed me by the seat of my pants and didn’t let go! There were a few scenes that were so intense I couldn’t flip the pages fast enough. I ended up finding myself more invested in the story and the characters than I thought I would be.
The ending left things pretty much wide open, and there’s not currently a sequel lined up…but I’m desperately hoping there will be another one! If there is, can I have more Callum, please? I hope to see more of some of the secondary characters and get to know them better!

I think dystopian fans would really enjoy this one and I definitely recommend picking it up!

“The liner makes your eyes look really exotic. Like Cleopatra. Or Mata Hari.”
Both sluts who died gruesome deaths. At least they were pretty.

8 responses to “Review: The Ward by Jordana Frankel”