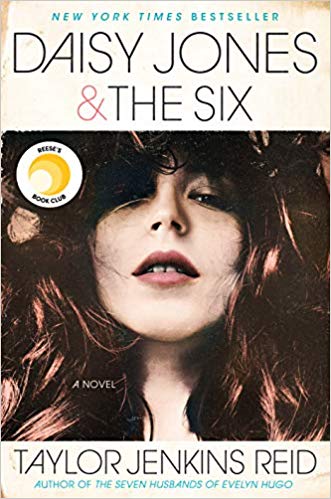 Everyone knows Daisy Jones & The Six: The band's album Aurora came to define the rock 'n' roll era of the late seventies, and an entire generation of girls wanted to grow up to be Daisy. But no one knows the reason behind the group's split on the night of their final concert at Chicago Stadium on July 12, 1979 . . . until now.

Daisy is a girl coming of age in L.A. in the late sixties, sneaking into clubs on the Sunset Strip, sleeping with rock stars, and dreaming of singing at the Whisky a Go Go. The sex and drugs are thrilling, but it’s the rock 'n' roll she loves most. By the time she’s twenty, her voice is getting noticed, and she has the kind of heedless beauty that makes people do crazy things.

Also getting noticed is The Six, a band led by the brooding Billy Dunne. On the eve of their first tour, his girlfriend Camila finds out she’s pregnant, and with the pressure of impending fatherhood and fame, Billy goes a little wild on the road.

Daisy and Billy cross paths when a producer realizes that the key to supercharged success is to put the two together. What happens next will become the stuff of legend.

The making of that legend is chronicled in this riveting and unforgettable novel, written as an oral history of one of the biggest bands of the seventies. Taylor Jenkins Reid is a talented writer who takes her work to a new level with Daisy Jones & The Six, brilliantly capturing a place and time in an utterly distinctive voice.

Honestly, this is something I NEVER would have picked up on my own. But my book twin Christy was raving about how amazing the audio was, and I’d been seeing a lot of hype surrounding the book. so I requested it from my library.

The hype for the audiobook? SO well deserved. It was fantastic, and to be honest every single one of those 2.5 stars is solely for the audiobook. The book itself? A solid Not For Me. I don’t give a shit about the life of musicians. Never have, never will. I don’t care to watch movies OR read books about them. And this one was exactly the same as all the rest: drugs, sex, alcohol, fame. Oh, and shitty people. Nothing I care to read about. If I had to rate the story versus the audio? Story: 1/5. Audio: 4.5/5.

The characters were awful people, especially the main two – Daisy and Billy. Billy was a controlling asshat that covered it up with righteousness and a self-entitlement to act like a controlling asshat. It was annoying, really. All Daisy cared about was drugs – look, I get that it’s an addiction, but damn. It’s literally all she did. And it made her a shit person to all the people in her life. Also, I understand that you can’t help who you fall for, and she did spend a lot of time with Billy. But fuck’s sake, woman, he is MARRIED. And he mentions multiple times how important Camilla and his girls are to him and how he’d do anything for them. The relationship between Daisy and Billy pissed me off. He never gave her reason to think that he wanted anything, but he also didn’t really turn her down. It was an accident that they fell for each other, but the fact that Daisy got all shitty when he chose his fucking FAMILY made me hate her. You knew he was married. Stop being a homewrecker.

The only characters I actually liked were Karen and Camilla. Eddie was bitter and whiny and all he did was bitch and moan about everything and how much he hated Billy blah, blah blah. Graham was just kind of there, I didn’t care about him either way. And I spent most of the book confused at who the others were because I couldn’t tell the male side characters apart (Warren, Rod, Pete, and a couple others that I don’t remember their names). There was one voice in particular that I spent 75% of the book confused as to who it was, and even in the end I’m not totally sure. I think maybe it was Warren, but there were two that sounded extremely similar so I honestly have no clue. Oops.

Overall, I hated the characters and the story. It’s just not something I care about. But the audio was compelling and addicting, so it kept me going! Do I recommend this book? Eh. Solely for the audio, nothing else. Although I do think that people who actually enjoy reading/watching about the life of musicians would love it.

One response to “Audiobook Review: Daisy Jones & the Six by Taylor Jenkins Reid”