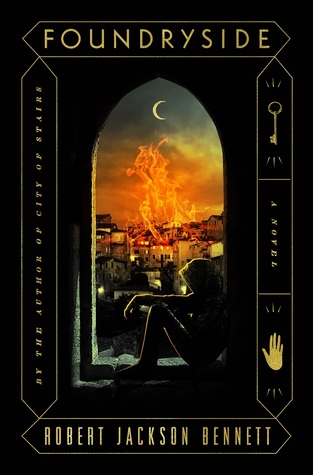 Sancia Grado is a thief, and a damn good one. And her latest target, a heavily guarded warehouse on Tevanne’s docks, is nothing her unique abilities can’t handle.

But unbeknownst to her, Sancia’s been sent to steal an artifact of unimaginable power, an object that could revolutionize the magical technology known as scriving. The Merchant Houses who control this magic--the art of using coded commands to imbue everyday objects with sentience--have already used it to transform Tevanne into a vast, remorseless capitalist machine. But if they can unlock the artifact’s secrets, they will rewrite the world itself to suit their aims.

Now someone in those Houses wants Sancia dead, and the artifact for themselves. And in the city of Tevanne, there’s nobody with the power to stop them.

To have a chance at surviving—and at stopping the deadly transformation that’s under way—Sancia will have to marshal unlikely allies, learn to harness the artifact’s power for herself, and undergo her own transformation, one that will turn her into something she could never have imagined.

The concept of this book is incredible! I really loved the unique magic system of “scrived” devices, it was unlike anything I’ve ever read before. That was what kept me going, because I felt totally apathetic about the story and characters.

Sancia is everything an MC should be, on paper – badass, resilient, determined, and was a clear underdog (coming from a poor background living on the streets, fighting to survive). She should have been easy to root for, but I had trouble caring about her as a lead and despite those qualities I couldn’t drum up any reason to root for her in my head. There was a massive disconnect there for me.

I think my major issue was that the writing style just didn’t jive with me. It was in third person, which I rarely care much for anyway; but I also found the prose to be very dry and unfeeling, which made it hard for me to connect to the story or the characters. I actually tried to read it and couldn’t get into it, so I tried again on audio. It did help quite a deal because I really enjoyed the narrator, but the story still didn’t wow me.

The secondary characters didn’t inspire much of anything for me – none of them seemed to have any real depth to them. Sancia spent almost the entire last half of the book with Gregor, Berenice, and Orso, but by the end of the book it still felt like we didn’t know them at all. Despite spending so much time with them, I felt as if there was no genuine interaction between them. It felt like they were just going through the motions robotically, speaking and working together. No feeling there whatsoever.

I felt the same about the romance. I loved the diversity – I didn’t realize Sancia was into women until past halfway, so that was a nice surprise and was also casually inserted and wasn’t made into a big deal. (Also there was zero romance in the first half which is a win for me! I love fantasy books with little to no romance.) However, there was absolutely zero chemistry between Sancia and Berenice. I was actually caught off guard when they kissed, because they hadn’t had any meaningful interaction up to that point. Other than the one time Sancia checked her out, there was no sign of romantic interest or flirting prior to the kiss. I would really have liked to see more buildup to that moment – ya know, ACTUAL. CHEMISTRY. Ya’ll know I don’t like romance to begin with, but this one definitely didn’t do it for me. I did appreciate that the romance didn’t have main focus while Sancia was fighting for her life (that always pisses me off, like priorities??), so there is that.

The only character I cared about was Clef, the magical speaking key. I LOVED him!! He kept me going, to be honest. The scenes with Clef in them were the only scenes I really cared about. I found myself growing bored whenever the focus shifted away from Sancia and Clef – I didn’t care much for Orso and Berenice’s chapters…but I outright hated Gregor’s. View Spoiler »I was actually kind of pissed that he came back to life. I was pleasantly surprised that he died, and even though I still didn’t feel anything, I like when authors don’t spare characters. I legit rolled my eyes when I found out he was still alive. Sigh. This is the one thing I don’t like about fantasy – characters don’t stay dead. As if I wasn’t already apathetic enough toward the things happening to the characters. « Hide Spoiler

<I want you to use me, Sancia. I want to do things with you. To be alive with you, to help you. You’re the only person I can remember truly knowing.>

(Literally the only line of the whole book that summoned ANY emotion for me. Of course it was Clef saying it!)

This was honestly what saved the book for me. The narrator, Tara Sands, is amazing!! She gave Sancia a personality that I’m quite sure she wouldn’t have had if I’d been reading. I loved how sarcastic she was! She really brought the story to life. I’m completely confident that I would have DNFed this book without her narrating.

The narration, Clef, and the scriving system were the only things I really liked about this book, and the ONLY reason it got 3 stars. I think the writing style grating on my nerves ruined this book for me, and I think most people will probably love it because it has pretty high ratings. Black sheep again…