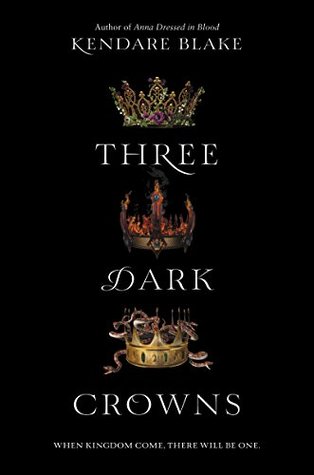 Every generation on the island of Fennbirn, a set of triplets is born: three queens, all equal heirs to the crown and each possessor of a coveted magic. Mirabella is a fierce elemental, able to spark hungry flames or vicious storms at the snap of her fingers. Katharine is a poisoner, one who can ingest the deadliest poisons without so much as a stomachache. Arsinoe, a naturalist, is said to have the ability to bloom the reddest rose and control the fiercest of lions.

But becoming the Queen Crowned isn’t solely a matter of royal birth. Each sister has to fight for it. And it’s not just a game of win or lose … it’s life or death. The night the sisters turn sixteen, the battle begins. The last queen standing gets the crown.

If only it was that simple. Katharine is unable to tolerate the weakest poison, and Arsinoe, no matter how hard she tries, can’t make even a weed grow. The two queens have been shamefully faking their powers, taking care to keep each other, the island, and their powerful sister Mirabella none the wiser. But with alliances being formed, betrayals taking shape, and ruthless revenge haunting the queens’ every move, one thing is certain: the last queen standing might not be the strongest … but she may be the darkest.

It’s been a really long time since I read a book that I hated so much that I legit wanted to throw across the room. And for whatever reason, I couldn’t stop reading it??? It was like watching a train wreck, it was SO. TERRIBLE. but I just couldn’t look away. (Or maybe I’m becoming a softie since I apparently have lost my ability to ruthlessly DNF anything I’m not enjoying….)

This book was honestly terrible. The romance was terrible. The characters were terrible. The writing was mediocre at best. I think the only good thing it had going for it was the super interesting world and concept (which was totally wasted on awful characters and poor execution).

This is honestly the most rage inducing book I’ve read in a very long time. So to elaborate on the Joseph/Jules/Maribella bit – basically, Joseph is a piece of shit. Maribella saves him from a terrible watery death and of course nothing puts you in the mood like a near death experience, amirite? So they get it on, then he’s all “womp womp I feel so terrible, you should have let me drown, I just cheated on the girl I’ve literally waited my whole life for, we need to go our separate ways now” then instead of leaving they get all kissy kissy then THEY DO IT AGAIN. As if that wasn’t irritating enough, he goes to “apologize” to Jules and is all “well I don’t want to make excuses for myself” then totally makes excuses for himself – about how he was delirious and cold and the tiny violins were playing in the background and GAG ME WITH A FUCKING SPOON because she actually forgives him?! (Although she did threaten to have Camden tear his throat out which was pretty satisfying?) THEN after getting separated from Jules on a hunt, he sees Maribella in the forest randomly AND STARTS KISSING HER AGAIN?! I legit had to go back and make sure I didn’t miss something (I was skimming at this point, not even sorry) because Joseph had literally JUST been smooching Jules and talking about running away with her not two chapters before that. THEN (yes again) he’s declaring his love for Jules and blah blah blah and literally the next chapter he’s lusting after Mirabella yet again (which this time Jules sees and realizes she was an idiot for taking him back which is too little too late because people get mauled to death by the bear she fails to control oops). BARF.

The Kat and Pietyr romance was gross, too. They barely knew each other and were kissing?? Like I thought I missed something there too because it was the second chapter after they’d met and they were already kissing. And a chapter or two later making professions of love *rolls eyes hard* Oh and at one point she was kissing another dude she’d just met. (Who, btw ends up with Arsinoe later like WHAT EVEN are these love shapes?!) GAG.

The characters were seriously awful and I hated them all. The only two characters I liked at all in the whole book were Camden (the mountain lion, are you surprised?) and Jules (who I still think is an idiot for taking Joseph back). I wanted to sucker punch every single one of the others.

I will say that there was an interesting little twist at the end that *kind of* redeemed the book a little bit. [spoilers]So if Arsinoe is really the poisoner, does that make Katharine the naturalist?[/spoiler] I’m curious, but I don’t think I’m curious enough to bother with the torture of reading the next book. I’ll probably just read a recap of it *shrugs*