As I mentioned in this past week’s Heartbeat Weekly, we finally got internet. On Saturday I was perusing Netflix and stumbled on the Stranger Things, which looked intriguing. I watched the intro of the first episode, and I was hooked! I stopped it and waited for Aaron to get home so that we could watch it together. And you know what? We binge watched THE WHOLE DAMN THING. IN ONE NIGHT. Seriously, we were up until 3 am watching! (That may not sound like a big deal, but I don’t think I’ve seen 3 am for many months, maybe even years haha!)

It’s SO. ADDICTING. Almost every single episode ends in a mini cliffhanger, so you just can’t stop. It’s sooo good! It’s got everything I need in a show:

Episode 5 in particular was friggin’ INTENSE. Like, I don’t get scared by anything, but it was super freaky! I was on the edge of my seat, it was seriously crazy! The scene with the deer….O___O

Side note: If you are easily scared by horror, this show might actually be scary for you.

One thing I love about this show is that you have absolutely no idea what the heck is happening. I had never heard of the show before I saw it on Netflix, so thankfully I hadn’t heard ANY spoilers. I honestly didn’t even know what this show was about – aliens? A virus, maybe? Or something else? Who knew! (Aaron and I were running theories…we ended up getting it right, too!)

You don’t really get any answers until several episodes in. It’s super intriguing because you don’t really know what’s going on! It keeps you interesting, wanting more.

I loved the conspiracy theories and coverup schemes. You never knew to what ends they would go to in order to keep their secrets!

A pair I can ship

I totally shipped Jonathan and Nancy (even though I actually kind of hated her)! I didn’t like her with the douche bag guy at all (I don’t even remember his name haha), and I wanted her to get with Jonathan SO. BAD. View Spoiler »Sadly, my ship sank. Hard. *cries* « Hide Spoiler

I was pleasantly surprised by the acting in Stranger Things. With it being a Netflix original, I honestly didn’t expect it the actors to be so good. I thought the whole cast did a superb job, and Winona nailed the distraught mother act! I really liked David Harbour as Hopper, too. He was my favorite character!

This series is set in 1983, so it has some awesome 80’s music such as The Clash, Toto, Bowie, Foreigner, and more! The intro theme is freakin’ epic, too! I love that synth sound, it reminded me strongly of John Carpenter. Rock on!

I absolutely loved the 80’s setting, the dark and twisted feel of the monster scenes (it’s SO HARD to talk about this without spoilers!), and just everything in general about this show! There was strong influence in the series from movies like Alien, E.T, Poltergeist, The Goonies, A Nightmare on Elm Street; and references from movies like Star Wars, Jaws, The Thing, and Stand By Me. I loved all of the 80’s pop culture that was in this show!

DISCLAIMER: I am NOT a TV series kind of person. I’m super picky and I’m TERRIBLE about keeping up with anything. (I watched the first two seasons of OUaT religiously, then missed the first episode of season 3 and just….never continued…) The ONLY show (besides anime) that I’ve ever stuck with past two seasons is Dexter. And since that finished I’ve never been able to find anything that could compare. Stranger Things is the first thing I’ve found that I could get that into, I was surprised by how much I enjoyed it!

Most shows I can take or leave – I may be engrossed in them while they’re playing, but the second they’re off I forget about them and I could care less. When I wasn’t watching this show, I was thinking about it. All I wanted to do was go back to watching it! (Even after I’ve finished it, I’m still thinking about the darn thing.) I even started to watch it a second time through with my parents! I seriously cannot rave about this show enough!

Yes. It was that amazing. You NEED to watch this show!

Horror October: The Show That is Slowly Growing on Me
Blogger Spotlight: Laura at Little Read Riding Hood 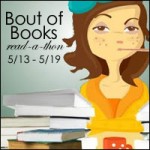