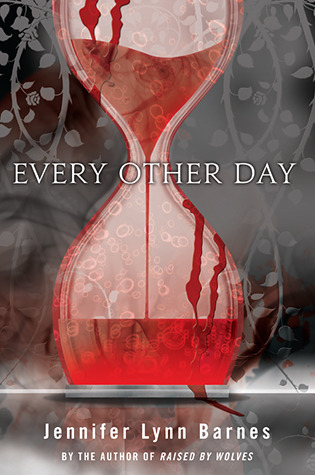 Every Other Day by Jennifer Lynn Barnes
Published by Egmont USA (12.27.2011)
Genres: Urban Fantasy, Young Adult
Format: Hardcover, 336 pages
Source: I own it

Every other day, Kali D’Angelo is a normal sixteen-year-old girl. She goes to public high school. She argues with her father. She’s human.

And then every day in between . . . she’s something else entirely.

Though she still looks like herself, every twenty-four hours predatory instincts take over and Kali becomes a feared demon-hunter with the undeniable urge to hunt, trap, and kill zombies, hellhounds, and other supernatural creatures. Kali has no idea why she is the way she is, but she gives in to instinct anyway. Even though the government considers it environmental terrorism.

When Kali notices a mark on the lower back of a popular girl at school, she knows instantly that the girl is marked for death by one of these creatures. Kali has twenty-four hours to save her, and unfortunately she’ll have to do it as a human. With the help of a few new friends, Kali takes a risk that her human body might not survive . . . and learns the secrets of her mysterious condition in the process.

This book and I had a love/hate relationship.

On one hand, I kind of hated it. The writing was HORRIBLY sophomoric, the interactions were juvenile, and the action scenes weren’t really believable. The writing didn’t sell the story. I think this had the potential to be an awesome book if the execution had been better.

The beginning was rough for me. I was really struggling for a while. The attempt at humor was so ridiculous it had me rolling my eyes and sighing. Lines such as:

But first, I had to deal with its friends, who I mentally christened Thing 1 and Thing 2.

Thing 1 and Thing 2 both began stumbling, their limbs gummed down by invisible weights.
“Sit,” I said as they staggered and finally went down. “Roll over.”
And then I smiled. “Play dead.”

…but ever since the puberty fairy had knocked me upside the head with her little wand, that was the way things had been for me.

I mean, out of context, most of them don’t seem all that bad. For some reason it annoyed the crap out of me! Every time there was an attempt at a witty remark, I was just like: 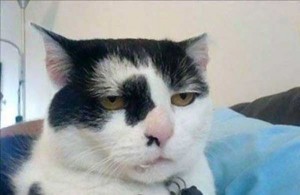 Maybe the “humor” wouldn’t bother most people, but it grated on my nerves and got under my skin. It may have worked in a different story, but in this one it sounded dumb. Again, it just wasn’t sold for me. Even this bugged me:

Heritage High was having a pep rally. A loud, crowded, too-early-in-the-morning, I’m-not-even-sure-what-sport-season-we’re-in pep rally.
With cheerleaders.
High school was, without question, the ninth circle of you-know-what.

Then, when they were breaking into a secret lab, they were trying to figure out how they were going to get the combination right. Could they guess? Could Kali’s kind-of-psychic friend “intuit” the numbers? Oh, wait, Kali already knew them. She just forgot. And conveniently remembered right when they thought there was no other alternative.

I’d almost forgotten that his cell phone hadn’t been the only thing I’d taken away from my little recon trip. I’d also memorized the passwords taped to the bottom of his desk.

How the hell do you forget something like that?! That is ridiculous!! Oh, and then there was this little gem:

“You killed her dead.”

He didn’t just kill her. He killed her dead. View Spoiler »If I had actually been upset that Skylar died, I wouldn’t have been anymore. « Hide Spoiler WHY would any writer think that line was a good idea, whyyy?! And as if it wasn’t bad enough the first time, it was used AGAIN! What the hell!

I was so annoyed by the prose that I was seriously considering DNFing. Then, enter Zev, the chupacabra. FINALLY I was enjoying it! The idea was so awesome, guys! A chupacabra that bit her, leaving a mark/tattoo on her skin, and could speak in her mind? So awesome!! I was super interested in Zev and was looking forward to more of him. It reminded me a little of the Hunter Kiss series, where the MC has tattoos all over her that come to life. I was so onboard. Until I wasn’t. View Spoiler »IT WAS A DUDE TALKING TO HER IN HER MIND BECAUSE HE’D BEEN BITTEN BY THE CHUPACABRA’S OTHER HALF. (They are “two halves of a whole” – gag.) I was so, SO disappointed when this was revealed. What the hell, man? Of course it’s a boy. OF COURSE IT IS. That completely and utterly ruined it for me. I wasn’t excited about Zev anymore. « Hide Spoiler

What I did love was the premise. She’s a normal girl one day, then the next day at dawn she turns into a ruthless hunter, going after demons and putting them down. Cool, right? That’s what was so disappointing for me. This book had SUCH potential, but it fell way short. The originality was fabulous, the idea was fabulous, but the awful prose brought the story down.

I didn’t care about Kali, either.  She didn’t have much personality to speak of, other than the forced sarcasm (which didn’t even work). I feel like Barnes tried too hard to make Kali fit into the witty badass mold. She was badass, sure, but only because of her abilities. There was nothing else inspiring about her. I did like some of the side characters, though – despite being the classic mean girl, Bethany wasn’t so bad. At least she had more personality than Kali did. But I have to say that Skylar was probably my favorite. She was quirky, and kind of absent minded. But I liked her. View Spoiler »Which is sad, because when she died I didn’t care. Like everything else, it wasn’t sold, so I felt nothing. « Hide Spoiler

Do I recommend this book? Maybe. Despite having such a memorable idea, the book itself wasn’t memorable. The only thing about this story that will stick with me is the idea of Zev.View Spoiler »You know, before I found out he was a fucking boy. « Hide Spoiler But, if the sophomoric prose doesn’t bother you like it did me, then you have the potential to really love this one.

2 responses to “Review: Every Other Day by Jennifer Lynn Barnes”