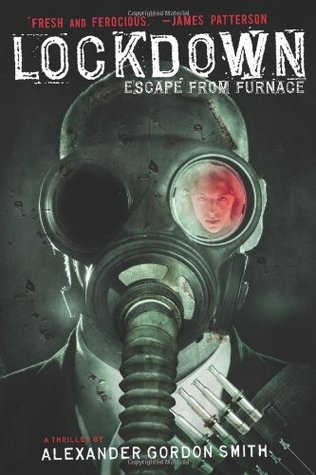 Furnace Penitentiary: the world’s most secure prison for young offenders, buried a mile beneath the earth’s surface. Convicted of a murder he didn’t commit, sentenced to life without parole, “new fish” Alex Sawyer knows he has two choices: find a way out, or resign himself to a death behind bars, in the darkness at the bottom of the world. Except in Furnace, death is the least of his worries. Soon Alex discovers that the prison is a place of pure evil, where inhuman creatures in gas masks stalk the corridors at night, where giants in black suits drag screaming inmates into the shadows, where deformed beasts can be heard howling from the blood-drenched tunnels below. And behind everything is the mysterious, all-powerful warden, a man as cruel and dangerous as the devil himself, whose unthinkable acts have consequences that stretch far beyond the walls of the prison.

Together with a bunch of inmates—some innocent kids who have been framed, others cold-blooded killers—Alex plans an escape. But as he starts to uncover the truth about Furnace’s deeper, darker purpose, Alex’s actions grow ever more dangerous, and he must risk everything to expose this nightmare that’s hidden from the eyes of the world.

Why oh why did I wait so long to pick this one up?! It’s been sitting on my shelf forever, but it was never really one that I was super interested in. While perusing my shelves for something horror that could also count toward the Rewind Challenge, I discovered this one. I’m SO glad I did! This book was pretty freaking awesome!

There wasn’t a dull moment in this entire book. EVER. Seriously, it was non-stop, heart-pounding action! The first sentence of the book is: “If I stopped running, I was dead.” So immediately I was like, Ooohh, I hope the rest of this book lives up to the first sentence! And it did. IT DID, GUYS. It kept me on the edge of my seat, biting my fingernails in anticipation! I was completely engrossed from start to finish.

Something even better than the constant action? It was creepy as hell! Take a pinch of Silent Hill, a shake of Crematoria from Chronicles of Riddick, and a sprinkle of Resident Evil. YES. That awesome. It reminded me mostly of Silent Hill because of the creepy gas mask dudes (like the things with the suit and the gas-detecting bird). The visuals in this book were bone chilling. Then there’s giant wolfhound sized dogs with no skin. Say what!

And let’s not even talk about the “slop” that the inmates had to eat. When they were talking about what it was made of, I was horrified. View Spoiler »Nothing grosses me out more than maggots! « Hide Spoiler The things that the kids had to go through were awful. And disturbing. In the scene where the gas mask dudes came out to mark the cages and take victims, my face probably looked like this:

I had no problem picturing the horrors of Furnace. Smith did a fabulous job bringing the terrible penitentiary to life! This book needs to be a movie asap!

The only complaint I have and the only reason that this didn’t get 5 stars was because I didn’t really connect with the characters. View Spoiler »I mean, when Donovan was taken I didn’t care at all…. « Hide Spoiler

This book is not for the faint of heart!