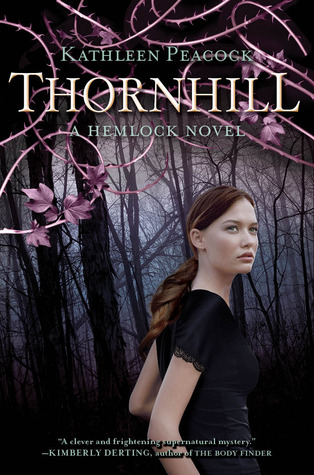 Kathleen Peacock spent her teen years crushing on authors and writing short stories about vampires. She put her writing dreams on hold while attending college, but tripped over them when office life started leaving her with an allergy to cubicles. Her debut, HEMLOCK, is coming May 8th, 2012 from Katherine Tegen Books, an imprint of Harper Collins, and will be published in the UK under the title DEADLY HEMLOCK from Simon and Schuster Children’s Books.

Where did you get the idea for Hemlock?

I actually got the idea while walking to work and listening to “It’s Been Awhile” by Staind. I was crossing this long bridge and a scene of Mac, Jason, and Kyle just popped into my head. All I knew was that one boy was a werewolf, one was a hunter, and that they both blamed each other for the girl getting hurt. The story evolved from there.

The short answer is that the Kyle who popped into my head the morning I had the idea was already a werewolf. The slightly longer answer is that I’ve always loved vampires and werewolves—An American Werewolf in London was practically required viewing in my parents’ house—it was probably inevitable that I would write about one creature or the other.

The answer changes based on the day, but probably Jason or Amy. Jason is so delightfully snarky and broken while Amy is like getting to write a maddeningly creepy version of the Cheshire cat.

What is your favorite scene or quote from Thornhill?

My favorite scene is the one where Kyle and Mac are reunited. Here’s a small taste:

He didn’t notice me. Not at first. He leaned against the window frame and pressed the knuckles of his right hand to the wood, a soft punch that might have been frustration or boredom. Then, with a deep breath, he straightened and turned.

Even at a distance, dark hollows were visible under his eyes, and it looked like a toss-up between what he had done last: slept or shaved. It had only been a few days, but he seemed somehow thinner and taller, like he had been stretched out.

I started to step forward and then hesitated. Relief. Hurt. Worry. A small flash of anger. I’d left everything behind to find him, but now that he was in front of me, I wasn’t sure what to do or feel.

I’m still working on the third Hemlock book (I’m in that blissful lull where I’ve handed in a draft but haven’t heard back from my editors), and I’ve been researching cults for a new project (which may or may not ever get started).

My favorite author is Douglas Adams. Partly because I like his books, but also because I think he was just such a lovely and witty human being. I have an audio book of him reading The Long Dark Tea Time of the Soul. I swear I could listen to it every day and never get tired of it. There’s just something about Douglas Adams that makes me feel like everything will be alright.

I have such a hard time picking just one. How about a handful? Practical Magic by Alice Hoffman, The Long Dark Tea Time of the Soul by Douglas Adams, Incarnate by Jodi Meadows, Circle of Friends by Maeve Binchy.