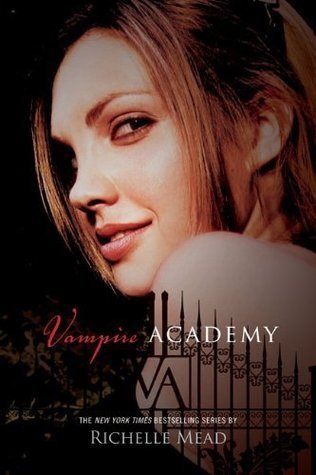 St. Vladimir’s Academy isn’t just any boarding school—it’s a hidden place where vampires are educated in the ways of magic and half-human teens train to protect them. Rose Hathaway is a Dhampir, a bodyguard for her best friend Lissa, a Moroi Vampire Princess. They’ve been on the run, but now they’re being dragged back to St. Vladimir’s—the very place where they’re most in danger...

Rose and Lissa become enmeshed in forbidden romance, the Academy’s ruthless social scene, and unspeakable nighttime rituals. But they must be careful lest the Strigoi—the world’s fiercest and most dangerous vampires—make Lissa one of them forever.

I was sure going into this one that I was going to enjoy it. EVERYONE loved it (seemed like it, anyway). Sadly, I was wrong. Again. *sigh* It seems like I’m always the black sheep when it comes to books with a lot of hype.
Don’t get me wrong, this book wasn’t terrible. I gave it 2.5 – which for me is somewhere in between ‘it was ok’ and ‘I liked it.’ Because although I mostly just felt ‘meh’ about this book, there were some times when I kind of liked it.

My main problem? Rose. I couldn’t stand her. She was way too full of herself, constantly pointing out how great her body was, how big her ta-tas were, how good she looked in x outfit. She was condescending, vain, and acted like she was the greatest thing since sliced bread. ‘I knew perfectly well that there weren’t a lot of girls in this school who looked as good in a bra as I did.’ If I had to hear ONE MORE TIME about how she was coveted for being the ONLY curvy girl around because all the Moroi were ‘flat chested,’ I was going to throw the book at a wall. Her shallowness was astounding! She thinks she’s hot stuff (in her words, ‘goddess-like’ and ‘scorchingly sexy’….gag me with a spoon), and flaunts it.

“So don’t you have any respect? […] You make yourself look cheap.”

Well said, Dmitri. Well said.
Rose was also petty and selfish. She used people to get what she wanted and didn’t care about anyone’s feelings but her own and Lissa’s (which were kind of her own, since she could literally feel them). She spread false rumors about someone just to seek revenge and hurt that person as bad as they hurt her. Oh, and did I mention she’s hypocritical? She sneered at ‘blood whores’ for being addicted to getting bitten and called them dirty; yet she took pleasure from getting bitten herself, and got jealous when Lissa fed off of other people. Just because you don’t admit you’re addicted to it doesn’t make you any better than the people that do. She was too focused on everyone else’s flaws to deal with her own, and she seriously grated on my nerves.
I feel like the author was shooting for badass, but she shot the arrow a bit too high and landed in bitchy territory. And there was NO character development. She didn’t get any better.

My second problem was that I couldn’t muster up any feeling for the characters. It’s not really that they didn’t have their own personalities – they did, and they stood apart for one another – they just fell flat for me. I didn’t like any of them. I didn’t hate any of them. Even Mia, the vindictive bitch of the story. She was nasty, and I just didn’t care enough to hate her. This is major for me, as I usually do hate the rude characters. Nope, nothing. Lissa: nice, sweet….vanilla. Mason: nice, sweet….meek. Natalie: nice, sweet….vapid. Dmitri was alright, I suppose. But I didn’t care about him as a love interest.

There was a twist toward the end (I figured it out only a few pages before it was revealed, so it wasn’t that predictable), but I didn’t feel the shock I should have. I wasn’t surprised. And the ending felt anticlimactic and rushed. I was left thinking, That’s it?


There was too much high school drama for me. Who’s backstabbing who, who’s sleeping with who, rumors and rivalries and the ‘he said,’ ‘she said’s. Being fake to gain popularity, getting back at someone you don’t like. Ugh. I would have liked a lot more action and more vampires. I actually forgot they were vamps sometimes.


All in all, I just didn’t give a crap about this book, and it was forgettable for me. I did really like the concept of Moroi vamps vs. Strigoi vamps, and the element abilities were cool. Rose and Lissa’s bond was fascinating. The concept was good, I just didn’t care for the delivery. I may try book 2 someday, to see if it improves. Maybe.

Side note: I don’t usually talk about covers, just give them a rating. But I feel the need to say that the more I looked at this cover, the more I hated it. The gate design and lettering looks cool, but that’s as far as it goes. The girl’s face bugs the crap out of me! With her Angelina-esque squinty eyes, too big lips, and over-plucked eyebrows, I don’t think she’s pretty. And her nose bothers me. I kinda wanted to tape a piece of blank paper of the cover so I didn’t have to look at it anymore.