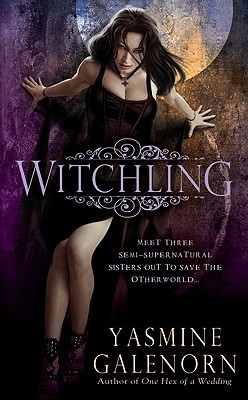 We’re the D’Artigo sisters: Half-human, half-Faerie, we’re savvy—and sexy—operatives for the Otherworld Intelligence Agency.  But our mixed-blood heritage short-circuits our talents at all the wrong times.  My sister Delilah shapeshifts into a tabby cat whenever she’s stressed.  Menolly’s a vampire who’s still trying to get the hang of being undead.  And me?  I’m Camille—a wicked-good witch.  Except my magic’s as unpredictable as the weather, as my enemies are about to find out the hard way...

At the Wayfarer Inn, a portal to Otherworld and the local hangout for humans and beasties alike, a fellow operative, Jocko, has been murdered.  Every clue points to Shadow Wing, the soul-munching, badass leader of the Subterranean Realms.  He’s made it clear that he aims to raze humankind to the ground, turning both Earth and Otherworld into his private playground.  Our assignment:  Keep Shadow Wing and his minions from creeping into Earth via the Wayfarer.  The demons figure they’re in like Flynn.  After all, with only my bumbling sisters and me standing in the way, how can they miss?  But we’ve got a secret for them:  Faulty wiring or not, nobody kicks ass like the D’Artigo girls...

I’ve been wanting to read this series for a while…and this isn’t the first time I’ve read Witchling. But, it was a loooong time ago and I had pretty much forgotten everything – except that I enjoyed it – so it was almost like reading it again for the first time. It’s a world I love to live in; exciting and magical, filled with all sorts of fantasy creatures imaginable! That was my favorite part: Meeting all of the vamps, weres, demons, and even a dragon (the BEST favorite part, by the way). Everything that happened was so convincing that it felt like I was right there, in the story. There was great background setting with a perfect amount of danger and action to keep my interest.

I would liked to have connected with Camille a bit more, but I must admit it’s probably because she’s not my favorite of the D’Artigo sisters. That would be Delilah – I’m looking forward to being in her POV! (Leave it up to me to latch onto any cat-like character…)

I’ve got to mention Maggie. She was a gargoyle, but not the kind you’d think: She was furry (tortoiseshell! Squee!) and…cat-like. Go ahead, roll your eyes at me. As soon as she came into the story, I was like, WHERE CAN I GET ONE OF THESE. 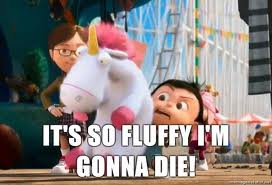 Seriously, dude.
Favorite character: Delilah. After all, she is a wereCAT. ;D

Catch more flies with honey…although I’d never quite understood the value of the expression. Mother had used it all the time while we were growing up and even as a child, I’d questioned why anybody would want to catch flies unless you were a goblin and used them for croutons.

One response to “Review: Witchling by Yasmine Galenorn”