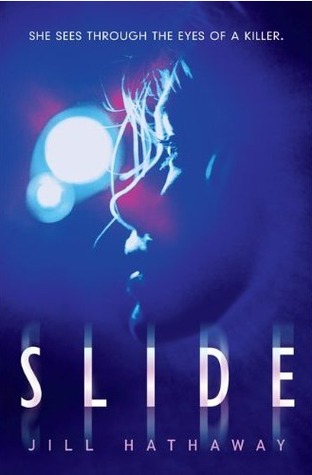 Vee Bell is certain of one irrefutable truth--her sister's friend Sophie didn't kill herself. She was murdered.

Vee knows this because she was there. Everyone believes Vee is narcoleptic, but she doesn't actually fall asleep during these episodes: When she passes out, she slides into somebody else's mind and experiences the world through that person's eyes. She's slid into her sister as she cheated on a math test, into a teacher sneaking a drink before class. She learned the worst about a supposed "friend" when she slid into her during a school dance. But nothing could have prepared Vee for what happens one October night when she slides into the mind of someone holding a bloody knife, standing over Sophie's slashed body.

Vee desperately wishes she could share her secret, but who would believe her? It sounds so crazy that she can't bring herself to tell her best friend, Rollins, let alone the police. Even if she could confide in Rollins, he has been acting distant lately, especially now that she's been spending more time with Zane.

Enmeshed in a terrifying web of secrets, lies, and danger and with no one to turn to, Vee must find a way to unmask the killer before he or she strikes again.

Secrets, lies, and danger, indeed! Slide was a fast-paced thriller with a plot that was crazy and twisted – I flew through this book in a matter of a few short hours because I didn’t want to put it down. The question of ‘Who is the killer?’ kept me thoroughly intrigued. Even though I rarely pick up mysteries, I enjoy reading them and trying to figure out what’s going to happen.
Slide was a bit predictable, I’m afraid. I had a feeling of mistrust for the person long before their identity as the killer was revealed. I figured out the motive fairly quickly by putting two and two together, and I don’t usually catch on very quickly when it comes to mysteries. Even though I was fairly sure I knew the truth, it was still a great journey to see things play out to the end. Although I was rather disappointed in Sylvia because it took her so long to figure things out. Even with the clues, she had to have the truth staring her right in the face before everything clicked.

All in all, Sylvia (aka Vee) was a pretty good lead. She was damaged and flawed, and that made her more real. I thought the aspect of ‘sliding’ was very intriguing! The idea of having a belonging with someone’s emotional imprint was pretty cool, too. I felt for Vee, though, because she couldn’t really control the episodes. I can’t imagine how horrible it would be to pass out at random and very inopportune moments.

There was an almost love triangle in the book, but thankfully Vee didn’t flip-flop. There was never a question of sides for me – while I wasn’t super excited about Rollins, I didn’t care for Zane at all. I don’t really know why, I just didn’t like him. Rollins was alright, and even though I didn’t swoon for him I did respect him for being there for Vee.