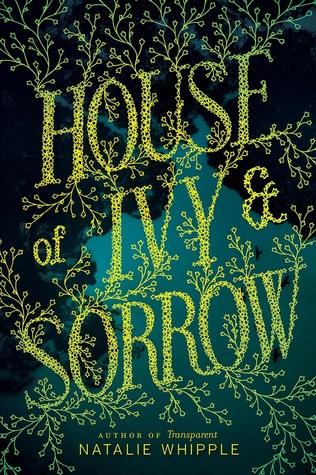 Josephine Hemlock has spent the last 10 years hiding from the Curse that killed her mother. But when a mysterious man arrives at her ivy-covered, magic-fortified home, it’s clear her mother’s killer has finally come to destroy the rest of the Hemlock bloodline. Before Jo can even think about fighting back, she must figure out who she’s fighting in the first place. The more truth Jo uncovers, the deeper she falls into witchcraft darker than she ever imagined. Trapped and running out of time, she begins to wonder if the very Curse that killed her mother is the only way to save everyone she loves.

Always in the shadows, draped in ivy and sorrow, the house waits for a child too daring for his own good.

Yes, this book was kind of fluffy, but there was a decent undercurrent of darkness that I loved. Maybe it didn’t quite achieve the ominous feeling that the name implies, but it had its fair share of seriousness.

I absolutely LOVED the magic of this story! I loved that there was always a high price for magic and I feel as if this book captured that with all the blood payments and hair- and fingernail ripping (*cringe*). Giving up a chunk of flesh, a tooth, or even your voice for a spell? Yikes! The feel of this book was very magical, and it’s been a long time since I read something like that (since Hex Hall, actually). I forgot how much I loved magic! I thought it was awesome that there wasn’t light and dark magic; all magic came from darkness, it was just a matter of controlling it or being consumed by it. Plus the house Jo lived in had two different entrances…through the same door! Sweet!

Something else I loved – the sense of friendship and family. Too many “best friend” relationships in YA are portrayed as catty and lean more toward frenemies than actual friends. I think there needs to be more wholesome friendships like this book had! Kat and Gwen were awesome best friends for Jo, and I love that they always supported her and stood by her side. They took the crazy in stride because Jo needed them. View Spoiler »And I LOVE that the spell made them sisters! Ahhh! All the warm fuzzies! « Hide Spoiler I liked seeing Jo and Joseph’s relationship develop as they came to know each other, as well as the relationship between Jo and Nana. There was a very strong bond in all of the familial relationships!

Sadly, though, I wasn’t sold on the romance. It had already sort of been established because Winn and Jo already knew each other and already had feelings for each other. I never really became invested in their relationship, and I didn’t particularly care about Winn either way. He was just there. Now, Levi, on the other hand…I wanted more of him! I guess I prefer the antihero type vs. the hero/good guy type. *shrugs* There was an almost-kinda-sorta love triangle that never fully developed, but I was kind of rooting for Team Levi even though it never really existed. XD

The mystery aspect of this book totally had me hooked! I was DYING to know what the crap was happening and who/what was behind everything. We only got snippets here and there, so you’re pretty much kept in the dark for at least the first half, which built suspense and held my interest.

And did I mention there was a talking cat?! (Bonus points from the cat lady haha!)

I was thoroughly impressed by how much Natalie Whipple’s prose has improved since Transparent. The way the story was set up in the beginning was very interesting and I was hooked from page one! While it wasn’t as dark as I expected, this book was delightfully magical – great for fans of Kiersten White and Rachel Hawkins!

Grief is such a strange thing. Sometimes it seems to be gone entirely, but then one smell or sound or memory and it’s as if it was waiting there, in the shadows, until you noticed it following you.

5 responses to “Review: House of Ivy and Sorrow by Natalie Whipple”