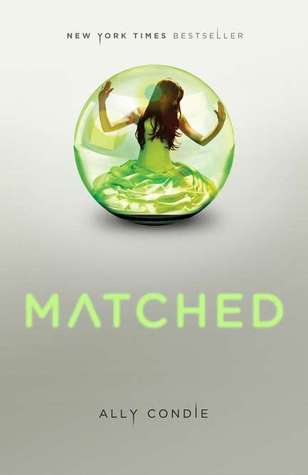 Cassia has always trusted the Society to make the right choices for her: what to read, what to watch, what to believe. So when Xander's face appears on-screen at her Matching ceremony, Cassia knows with complete certainty that he is her ideal mate... until she sees Ky Markham's face flash for an instant before the screen fades to black.

The Society tells her it's a glitch, a rare malfunction, and that she should focus on the happy life she's destined to lead with Xander. But Cassia can't stop thinking about Ky, and as they slowly fall in love, Cassia begins to doubt the Society's infallibility and is faced with an impossible choice: between Xander and Ky, between the only life she's known and a path that no one else has dared to follow.

I was really confused at the beginning because things weren’t explained right away…like the pills, what the heck are the pills?! But soon you find out that the green pill is to calm you, blue is to help you survive in case of emergency…and the red pill is the big mystery. I figured it out right before it was revealed, I was pretty proud of myself. It made sense, really, considering how Society wants to mold everyone. The sleep tags were one thing that weren’t explained very well. They’re some way for Society to monitor people’s dreams, but I would have liked to know more about them and how they work.
I know I’ve said this before, but I’m going to say it again…I hate love triangles! With a passion. Cassia pisses me off most of the book. She is matched with Xander, who is perfect and perfect for her, but because of one small error – seeing Ky’s face – she continuously thinks of Ky. She knows it’s wrong but still pursues it. The romance fell flat for me. I didn’t get that happy feeling. I thought the “love” between Cassia and Ky developed much too quickly. She hardly knew him before the L word came into play. Because of that, I couldn’t relate to their relationship.
I had trouble relating to any of the characters. They didn’t feel real to me, and I felt no emotion for any of them while reading. I felt very disconnected. The situation of Society however, I did feel for. Horror. It’s a world where Society controls everything – what you eat, where you work, who you marry – your ability to choose is non-existent. You’re matched with your ideal mate for physically and emotionally healthy offspring. Longevity is important. The food you eat is healthy, your calories moderated.
Death is planned – everyone dies at 80. I found this very far-fetched at first – but in the end you find out why it works so perfectly. You die healthy and just at the right time so there’s no depression or feelings of uselessness that come with the deterioration of your mind and body. There’s no more uncertainty. You know when you’re going to die. Horrifying, right?
There are no more diseases due to regulation of food and exercise. This was extremely hard to believe. Just because you eat healthy and die at “optimal” age doesn’t get rid of sickness. Condie is all about only the strong survive, but never says anything about the sick. She says that “cancer, heart disease, and debilitating illnesses are almost entirely eradicated.” Yet there’s no mention of medicine or cures. So how are they eradicated? By eating healthy food? Riiiiiight. A whole society of perfectly healthy people is impossible. Simple as that.
All types of anything art are obliterated, leaving only the 100 best of everything. Songs, paintings, poems, etc. This horrified me. Who is to decide what the best are? Everyone has their own opinions. Writing is forbidden, they are only allowed to type on their ports – which I really don’t know much about because they weren’t really explained very well. What I got is that they’re a computer/TV/telephone kind of thing. That’s all I know. The point is, they pretty much lost history and lost touch with the past, with who we are and who we were.
Everything is about specialization so people don’t feel overwhelmed. Society made it so you only know how to do the job you’re taught so you can’t survive on your own. They choose and predict everything for you based on your ‘personal data.’ People just aren’t that predictable. Some are, sure, but there will always be plenty who are spontaneous. And there’s no weapons used on the citizens. They obey, just like that. I think there would be much more rebellion going on with such placid Officials.
Basically, Society expects everyone to be perfect. But there is no such thing. Being different and making our own choices, and most specifically our own mistakes – that’s what makes us human. Taking that away….we may as well be robots. I couldn’t take that without a fight. I really don’t know how anyone in this book did.
In the beginning, Cassia did. She said there was “no reason to rebel.” I hated her right then and there for being so blind. But then she starts falling for Ky and begins to question everything. Begins to realize it’s okay to wonder. She finally, finally sees what should have been obvious:

“Now I want everything. More and more, I want to pick my work position. Marry who I choose. Eat pie for breakfast and run down a real street instead of on a tracker. Go fast when I want and slow when I want. Decide which poems I want to read and what words I want to write. There is so much that I want. I feel it so much that I am water, a river of want, pooled in the shape of a girl named Cassia. Most of all I want Ky.”

And you should be able to have all that. You should have the freedom of choice. I was glad that she finally realized that.
All in all, I was fairly disappointed with Matched. There was a lot of hype about it so my hopes were high. I know that everyone has different tastes, but I truly don’t understand how this book could get any 5 star rating. I was pretty bored and un-thrilled with this book for the majority of the story. It did get better when Ky and Cassia get separated and her loyalties change. The stakes get higher, so the end of the book was pretty good. I’m not in a big hurry to read Crossed, though. If I ever do.

Plot: 3/5
Writing Style: 2.5/5
Pretty boring. No humor. Didn’t sell the story of ‘perfect’ humans.
Characters: 1/5
Did not feel real at all.
Pace: 3/5
Not nearly enough action or excitement for me.
Cover: 4.5/5
Her dress is pretty and I like that it conveys her being caught in the confined bubble of Society.
Overall rating: 2.5/5 starfish

One response to “Review: Matched by Ally Condie”