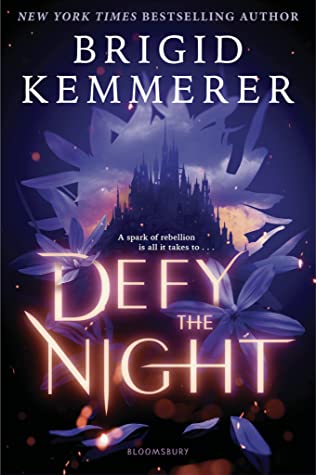 The kingdom of Kandala is on the brink of disaster. Rifts between sectors have only worsened since a sickness began ravaging the land, and within the Royal Palace, the king holds a tenuous peace with a ruthless hand.

King Harristan was thrust into power after his parents' shocking assassination, leaving the younger Prince Corrick to take on the brutal role of the King's Justice. The brothers have learned to react mercilessly to any sign of rebellion--it's the only way to maintain order when the sickness can strike anywhere, and the only known cure, an elixir made from delicate Moonflower petals, is severely limited.

Out in the Wilds, apothecary apprentice Tessa Cade is tired of seeing her neighbors die, their suffering ignored by the unyielding royals. Every night, she and her best friend Wes risk their lives to steal Moonflower petals and distribute the elixir to those who need it most--but it's still not enough.

As rumors spread that the cure no longer works and sparks of rebellion begin to flare, a particularly cruel act from the King's Justice makes Tessa desperate enough to try the impossible: sneaking into the palace. But what she finds upon her arrival makes her wonder if it's even possible to fix Kandala without destroying it first.

Brigid Kemmerer is really hit or miss for me. I think I lucked out when I enjoyed A Curse So Dark and Lonely as much as I did. Maybe I just needed to be in a certain mood for it, who knows. I didn’t like the sequel much, and I felt pretty much the same about this one. My main gripe is that this book is generic AF. It’s such a vanilla story – the world, the characters, even the plot (what little plot there was, anyway). It’s full of tropes and cliches and just felt like a mashup of a million other books that I’ve already read a million times. It felt like every other generic YA fantasy out there – there was literally nothing about this book that stood out in the sea of fantasy books. Which unfortunately made it extremely predictable. View Spoiler »I called Tessa’s friend being the prince in the very first scene he was in. « Hide Spoiler

It’s also a very character driven novel, which is a huge flaw when the reader (me. It’s me) doesn’t connect to any of the characters. Womp womp. I just didn’t care about any of them, or what was happening to them, or even the romance. I felt very meh about everything.

I’m going to be honest, I probably should have DNFed this book. But somehow I couldn’t stop listening to the audiobook, and I don’t even know why. I was bored, but still compelled to keep going – which is the only reason this book gets 2.5 stars. I didn’t hate it, even though I couldn’t say I actually enjoyed it. But there is something about this book that makes you want to keep going; it’s a quick and easy listen despite being fairly long.