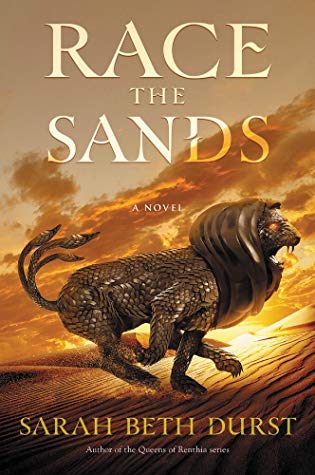 In this epic standalone fantasy, the acclaimed author of the Queens of Renthia series introduces an imaginative new world in which a pair of strong and determined women risk their lives battling injustice, corruption, and deadly enemies in their quest to become monster racing champions.

Life, death, and rebirth -- in Becar, everyone knows that who you are in this life will determine what you are in your next life. The augurs can read your fate in your aura: hawk, heron, tortoise, jackal, human. Armed with that knowledge, you can change your destiny with the choices you make, both in this life and your next. But for the darkest individuals, there is no redemption: you come back as a kehok, a monster, and you will always be a kehok for the rest of time.

Unless you can win the Races.

As a professional trainer, Tamra was an elite kehok rider. Then a tragic accident on the track shattered her confidence, damaged her career, and left her nearly broke. Now Tamra needs the prize money to prevent the local temple from taking her daughter away from her, and that means she must once again find a winning kehok . . . and a rider willing to trust her.

Raia is desperate to get away from her domineering family and cruel fiancé. As a kehok rider, she could earn enough to buy her freedom. But she can't become good enough to compete without a first-rate trainer.

Impressed by the inexperienced young woman's determination, Tamra hires Raia and pairs her with a strange new kehok with the potential to win -- if he can be tamed.

But in this sport, if you forget you're riding on the back of a monster, you die. Tamra and Raia will work harder than they ever thought possible to win the deadly Becaran Races -- and in the process, discover what makes this particular kehok so special.

The book I read was an uncorrected proof. Any quotes used may be subject to change.

Color me disappointed, because I was really looking forward to this one. The concept is incredible! Bad people’s souls are reincarnated as monsters called Kehoks in their next life, and basically take the form of a chimera. People race them, and the Kehok that wins gets redemption for their soul. It’s so cool!

However, this book fell really flat for me. My main issue was that it felt pretty juvenile, even for YA. One of the main characters, Tamra (the trainer), was old enough to have an 11 year old daughter – so, assuming she was at least 15, that puts her in her late 20’s at minimum. However, she felt like a teenager. I kept forgetting that I was reading an adult, because she felt so young. I found the writing style to be really sophomoric.

The world building wasn’t great. The concept was really cool, and there’s enough there about the Kehoks for understanding on that subject, but the actually kingdom and the world weren’t very fleshed out. I didn’t have a very good grasp on the world and what their society looked like because there wasn’t much given about it. At one point we got this:

Legend said the desert was a gift from the sky to the earth. The constellations saw a lush, green world and wanted to shower it with their light, and so they sprinkled bits of stars. Those star bits became specks of sand, and where they fell, nothing grew. So much fell that the creatures feared it would extinguish all of existence. All the birds flapped their wings and all the animals blew to created wind to move the sand into one area. And then the warrior Aur cracked the world in the middle of the sand and created the mighty river. Or something like that.

Or something like that? Are you kidding me? It was a story Raia’s father told to her as a kid, so that was her recount of it, but still…that is incredibly lazy world building, sorry. Personally I would have liked the world better explained, and in a more mature tone.

I didn’t really like any of the characters, either. They all felt pretty generic. I especially didn’t like the prince, who was fantasizing about the nobles being reborn as ridiculous animals while they were “waxing on about flood levels and taxes.” He didn’t seem to give a shit about his kingdom, and the overall tone he had toward people that were looking to him for leadership and advice irritated me. I understood that he was young, and he even said later that he DID care but just couldn’t do anything about certain things, but he just acted like a petulant child about his responsibilities. Especially for someone supposedly groomed for the position his whole life. View Spoiler »Also, as soon as it was mentioned he had a dead brother, and they had to find his reincarnated soul, I knew immediately that the lion Kehok that Raia was riding was going to be him. I skipped ahead and sure enough, I was right. Waaay predictable. « Hide Spoiler

Maybe it picks up and gets better at some point, but I just can’t bring myself to continue. Whomp whomp.