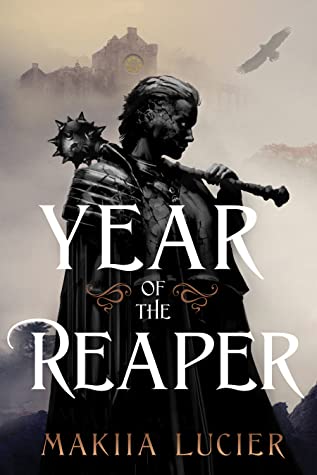 Before an ambush by enemy soldiers, Lord Cassia was an engineer's apprentice on a mission entrusted by the king. But when plague sweeps over the land, leaving countless dead and devastating the kingdom, even Cas’ title cannot save him from a rotting prison cell and a merciless sickness.

Three years later, Cas wants only to return to his home in the mountains and forget past horrors. But home is not what he remembers. His castle has become a refuge for the royal court. And they have brought their enemies with them.

When an assassin targets those closest to the queen, Cas is drawn into a search for a killer… one that leads him to form an unexpected bond with a brilliant young historian named Lena. Cas and Lena soon realize that who is behind the attacks is far less important than why. They must look to the past, following the trail of a terrible secret—one that could threaten the kingdom’s newfound peace and plunge it back into war.

This book was absolutely NOT what I was expecting at all, but I really enjoyed it! To me this cover screams viking story, but that’s not even remotely close. (The cover does not fit the story at ALL in my opinion, sorry) I didn’t know much going in, just that I loved the cover and that it had really high reviews. I am slightly disappointed that I didn’t get a viking story, lol. (I know, I know, don’t judge a book by it’s cover, Jessi.)

Anyway, what I did get was a gritty historical-feeling high fantasy romance about political tension and a plague, with a little sprinkle of paranormal in there. Although, I didn’t feel that the latter really fit with the story to be honest. View Spoiler »Cas’s ability to see ghosts was so odd in this narrative. There was literally nothing else in this story to make it actual fantasy or sci-fi (besides maybe a fantasy setting), and no one else had any abilities to speak of. « Hide Spoiler It just seemed so random and unnecessary to me!

I freaking LOVED that they had lynx as pets! And the back story was bomb AF:

“The way the story goes, the lynx lived on these lands long before man. They were here when the giants ruled the mountains. Palmerin is said to have been built on the ruins of a great city of giants. These giants kept little cats as pets. The cats slept on the giants’ shoulders. They were fed off the giants’ plates. When the lady giants went to call on their friends in town, they carried their cats inside little baskets. Their race eventually died out, but their pets remain in Palmerin.”

YAASSSS. That was by far my favorite part of this book!

It’s hard to talk about anything else without giving the story away, but there was a BOMB dropped and I think it’s one of the best twists I’ve ever read!

View Spoiler »‘LADY MARI’ IS THE REAL PRINCESS JEHAN!!!!! The true Lady Mari took Jehan’s place and left her to die in a hospital and was just masquerading as the princess, whaaaat?! When that part was revealed I swear my jaw actually dropped because I was so gobsmacked! That blew me away! I was also pretty shocked that Ventillas was in on it. I figured he had something to do with Mari and Jehan, but I did NOT guess that. I just thought he’d slept with Jehan or something and they were just covering it up!

I honestly thought that Lena was the archer in the beginning. The timing was perfect for it – she’d just got to the city when the assassination attempt happened. I was SURE it was her. Nice red herring there! « Hide Spoiler

The main reason this book didn’t get a higher rating is that I really couldn’t connect to the characters at all. I felt pretty apathetic about them, actually. Other than the shock value of the massive twist, I didn’t feel much at all while reading this. View Spoiler »And Jehan literally having her lady parts stolen from her and not having a choice about not being able to have children really should have affected me. « Hide Spoiler I didn’t care much for the romance, either. It was sort of an enemies-to-lovers situation, which I usually love, but this one just didn’t do anything for me.

It was still a good story, though, and I definitely recommend picking it up!

“Loss is a part of life, my lord Cassiapeus, and grief is constant. It is unbearable at first. Then you find you can indeed bear it. Over and over again. As many times as necessary.”

One response to “Review: Year of the Reaper by Makiia Lucier”