I’ve posted these tips almost every year, but I wanted to repost them since it’s about that time again, and I always have things to add!

This will be my sixth year attending the festival and I am SO FREAKING EXCITED. The past five years have been chaotic, but SO FUN! This festival is non-negotiable in my schedule and I look forward to it every single year! You can see my recap of the last couple years here.

Books at the festival are list price, so they are expensive! I always order from Amazon in advance and take my books with me to save money. There’s also been a couple of years where they sold out of popular new releases, so you may not always be able to get them.

They do usually have extra signed books available in the big tent after authors sign, so if there’s someone you miss, try hitting up the tent to see if you can still snag a signed copy!

My best advice is to bring a suitcase, or anything with wheels. I’ve carried a suitcase for 5 years and it’s worked great for me. I’ve also seen people with collapsible cloth wagons. This year I’m ordering a rolling backpack so I can navigate tight crowds easier (the suitcase is unwieldy). Carrying around 20+ books all day long gets exhausting, wheels are a lifesaver! I always bring an extra bookish tote or two with me to put my free swag in, but a lot of the publisher booths have free tote bags up for grabs too.

Tip: Take the dust covers off the books you bring so they don’t get damaged!

My favorite hotel in Charleston is Hawthorn Suites by Wyndham (North Charleston)! They are pricey but the rooms are 1000% worth it. They are super fancy and make a perfect getaway! The rooms are in separate little cabin-type buildings, and the interior is super impressive. They offer a full kitchen and the most comfortable beds you’ll ever sleep on in a hotel!

Tip: If you have friends going, split the cost and share a room!

In 2015 Aaron and I planned to drive down on Friday for the events on Friday afternoon. We left pretty much just enough time to make it down there – it started at 4 and I think we left at like 5 am, and it takes 10 hours to get down there. What we didn’t plan for? Blowing a tire. And of course, it happened on I-40, which is basically BFE and the exits are oh, about 978364 miles apart. We spent a good two hours searching for a tire place – mind you, this was driving FORTY MILES AN HOUR ON THE HIGHWAY (talk about scary!!!) on a donut – so by the time we finally got down there it was about 7:30 and we completely missed everything that happened Friday.

I never did that again! Now I usually book a hotel for Thursday night, too (which I’m doing this year), so I can drive down on Thursday and have plenty of time to make it down there and rest after the drive before Friday’s events.

ARRIVE EARLY TO THE FESTIVAL

In 2013 (my first year – I was a noob), we arrived in town right on time. HORRIBLE idea. Make sure to leave yourself at least 45 minutes just for parking. Seriously, it’s a zoo. The closest parking garage has itty bitty parking spaces (in other words, drive a small car if you can!). The first year it took me FOREVER to find a spot I could fit into (and that’s with a G6…imagine a truck or SUV), and by the time I did I was so frustrated I already wanted to leave. Then I was upset for the first couple hours because I missed out on authors I wanted to see. Don’t be like me!

The first signing is at 10, but the lines for the 10 signings tend to start at 9 am. Your best bet is to get there BY 8 to find a parking space.

Tip: If there are big-hitter authors you want to see signing Friday, get them out of the way! It makes Saturday SO much easier when you get to those major authors on Friday.

Tip: Prioritize by how popular/well-known an author is. This is what I’ve done the past couple of years and I’ve been able to see more authors because of it! If the author is new or not well-known, chances are their line will be short. If you can do those first and get them out of the way, you can hit up the tail end of the longer lines for big-hitter authors (just make sure they don’t have a panel to go to so they don’t cut the line short). If there’s an author like Leigh Bardugo signing at 2pm, you can bet her line will still be going an hour later. Sometimes the authors with short lines leave after their lines empty, so they may be gone by the time the next hour rolls around.

Tip: While standing in line have your books ready to go. Open them to the title page (that’s where they sign) and have a sticky note with your name on it, this streamlines the signing process!

BRING A FRIEND (OR TWO!)

The best way to get more books signed is to split the load. Then you can knock out multiple signings at once! Figure out which authors each of you wants to see the most, and which ones you can get by without meeting (but still get a signed copy, of course). Then go your separate ways and find somewhere to meet after you’re done! I’ve actually done this with people I’ve just met and befriended AT the signing. Book people are awesome ;)

This of course is the most important part! I had a BLAST the past five years meeting bookish people (including Team Epic Reads and a couple bloggers!) and awesome authors and I am SO stoked to be returning as a SIX YEAR veteran! Whoop whoop!!!

Have you ever been to YALLfest? Who else is going this year?! I’d love to meet up! 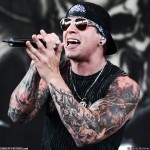