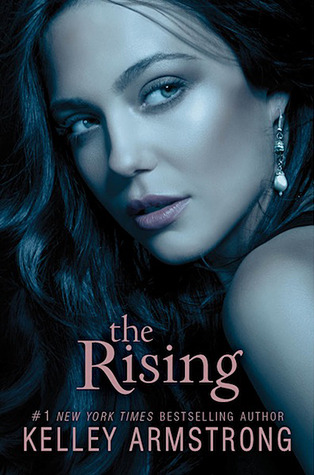 Things are getting desperate for Maya and her friends. Hunted by the powerful St. Clouds and now a rival Cabal as well, they're quickly running out of places to hide. And with the whole world thinking they died in a helicopter crash, it's not like they can just go to the authorities for help.

All they have is the name and number of someone who might be able to give them a few answers. Answers to why they're so valuable, and why their supernatural powers are getting more and more out of control.

But Maya is unprepared for the truths that await her. And now, like it or not, she'll have to face down some demons from her past if she ever hopes to move on with her life. Because Maya can't keep running forever.

Out of the entire series, I think that this book is the best one! I was very pleased with a few little twists that were added, and it made it overall more enjoyable. And I don’t want to say why without using spoiler tags because I don’t want to ruin it for anyone!

View Spoiler »DEREK! CHLOE! SIMON! A Pack near Syracuse?! EEEEP FANGIRLING. I looooved the cameos! The last half felt more like the Darkest Powers series and it was totally nostalgic! This book was the most memorable of the series because old favorite characters came back. I loved all the tie-ins! There were a few little snippets in there that you wouldn’t understand without reading Darkest Powers, or the Otherworld books with Elena and Clay. Even Savannah was mentioned…and there was a reference to Jeremy too!

(I included this in spoilers because if you’re like me and you don’t pay a whole lot of attention to the synopsis after adding it initially, their appearances will be a very wonderful surprise!) « Hide Spoiler


The first half was kind of slow, honestly. It didn’t pick up until the appearance of what I mentioned in the spoiler tag. The first half would probably be 3 stars, but the second half was more like 4 stars. I was originally going to give this book 3.5/5, but I enjoyed the second half so much that I decided on 4/5. View Spoiler »To be honest, without the tie in, I wouldn’t have enjoyed this book half as much. That was what ultimately led to a higher rating from me. « Hide Spoiler

And the next part I can’t talk about without spoilers, either…because I didn’t know about it until it happened and I wouldn’t have wanted to know. (Actually, if I’d have known I might have dreaded reading it, and it would have ruined some of the enjoyment. So if you haven’t read this, don’t read the next part!)

View Spoiler »I am SO not cool with the love triangle. Or that she ended up with Daniel. And I hate that Kelley ruined the strong platonic relationship that they had in the first and second book. GUYS AND GIRLS CAN BE FRIENDS. I want more platonic relationships! That was something I was really excited about with this series, because it’s something that isn’t portrayed very often. And when it is, it’s rare for it to remain strictly platonic. I thought this would be one of those rare ones. WRONG. Really, my major issue with her ending up with Daniel is: IT MAKES NO SENSE!! Rafe is a shifter, too. They make sense. (And Rafe is better. Just sayin’) Not to mention there was never even a hint of feeling there until BAM! Rafe was all O BTW DANIEL LURVES YOU and then Maya was all OMIGOSH I LURVE HIM TOO.

Wait, what? WHERE THE HELL DID THAT COME FROM?! « Hide Spoiler


Something that bothered me, and it’s something that’s been throughout the whole series: The portrayal of adults being rather obtuse. Every time the kids were about to get caught, they would throw someone out to be the diversion while the rest got away. And when I say every time, it happened like a dozen times. I feel like most of this series was a lot of running, almost getting caught, and someone sacrificing themselves so the rest could get away, until no one was left but Daniel and Maya. It happened over and over again, and in the final running sequence it seemed non-believable because it had happened too often already.

It should have been a desperate situation, but it never really felt desperate. View Spoiler »Even with Daniel getting shot. « Hide Spoiler There never seemed to be any real danger.

Am I satisfied with the ending? Mostly. View Spoiler »I’m still kind of annoyed that she ended up with Daniel. « Hide Spoiler

One response to “Review: The Rising by Kelley Armstrong”