The twenty-one year-old Timothy “Tim” Allen Russell is discharged from a mental institution by his psychiatric Dr. Shawn Graham completely healed from a childhood trauma. His sister Kaylie welcomes him in the parking area and brings him home. Then she tells that they need to destroy an ancient mirror that she has just bought in an auction. The reluctant Tim follows his sister and has fragmented recollections from his childhood, when his mother Marie buys a mirror for the home office of his father Alan. Kaylie and Tim see a woman with their father in his office and the behaviors of Alan and Marie change, ending in a family tragedy. Kaylie blames the mirror and now she wants to destroy it with Tim. Will they succeed?

What an epic movie!! It’s been a VERY long time since I’ve seen a horror movie that impressed me so much. I love horror, but more often than not it ends up just being funny to me. Good horror movies are few and far between these days – most of them are cheesy! I do have to say that this one is one of the best horrors I’ve ever seen. It definitely makes my top 5!

To be honest, I didn’t care too much about wanting to see this. It was one of those that I kinda wanted to see but wasn’t in a real hurry to actually see it. I think it’s the cover, I hate it!! But, I was pleasantly surprised and it ended up blowing my mind. It’s not so much that it’s scary, necessarily – movies don’t scare me anyway – but it was delightfully creepy! The selling factor of this movie was the psychological part of it. It made me feel like even I was going crazy! You don’t know what’s real or not real, and it’s awesome. Total mind f*ckery! View Spoiler »When Kaylie stabs her fiancé (or boyfriend, whatever he was), you have NO idea if it’s really him or not! It was crazy! « Hide Spoiler

I was on the edge of my seat the whole movie. It’s fingernail-biting good! It will definitely keep you engrossed, holding your breath to find out what happens next. I thought all of the actors/actresses did a great job, too – Karen Gillian rocked it!

I’m not going to spoiler tag this because it was in the actual preview for the movie, but the lightbulb scene was definitely my favorite. There’s a moment of  “holy f*ck, did she really just do that?” HOLY CRAP, YOU GUYS. This movie is just packed with so much awesome I don’t even have the words for it.

THE ENDING. OMG. View Spoiler »As soon as he pushed the kill switch I knew that she would be standing there in front of the mirror, but it didn’t make it suck any less! And there’s still a moment where you’re not sure if it’s really her or not. It’s interesting that because he didn’t have faith in his sister, history repeated itself, and he ended up losing her because of it. I’m glad they didn’t go for the HEA! « Hide Spoiler

I’m not exactly sure you should watch this movie if you’re not a fan of horror or scary things. It might disturb you a bit! 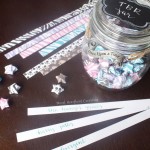 My TBR Jars are up on Etsy!