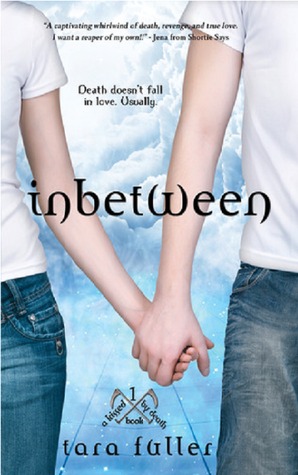 Since the car crash that took her father’s life three years ago, Emma’s life has been a freaky — and unending — lesson in caution. Surviving “accidents” has taken priority over being a normal seventeen-year-old, so Emma spends her days taking pictures of life instead of living it. Falling in love with a boy was never part of the plan. Falling for a reaper who makes her chest ache and her head spin? Not an option.

It’s not easy being dead, especially for a reaper in love with a girl fate has put on his list not once, but twice. Finn’s fellow reapers give him hell about spending time with Emma, but Finn couldn’t let her die before, and he’s not about to let her die now. He will protect the girl he loves from the evil he accidentally unleashed, even if it means sacrificing the only thing he has left…his soul.

Not gonna lie, I really waffled on writing this review because I wasn’t sure what I was going to say. I liked it but it wasn’t amazing…the end. Ha.
I’ve been looking for a good reaper book for a while, because I’ve read a few in the past that I didn’t care for at all. This book didn’t wow me like I had hoped, but it was a light and cute read!

I was a little overwhelmed at first, because I had some confusion with the world building. It took a while for me to get to know what everything meant. I didn’t know anything about the Inbetween until much later in the book. Once I got used to it though, it was interesting. The way the reapers feel the ‘pull’ when they’re called for a reap, and how there were different reapers for Heaven, Hell, and the Inbetween.

I feel like there wasn’t much happening plot-wise. There wasn’t a whole lot of action until the last half when Maeve really made a full appearance. Most of the first half was just Finn following Emma around longingly. I was caught between thinking it was romantic and thinking it was creepy. While it was a little weird that he watched her 24/7, I understood his feelings for her. It’s hard to want someone that you can’t have. And the fact that he had waited so many years for her was endearing.

I couldn’t connect with the characters the way I’d hoped, either. While I generally like switching points of view, this one didn’t exactly pull it off. There were times when I couldn’t tell the difference between Finn and Emma, resulting in a lot of confusion on my end. The secondary characters – Easton, Anaya, and Cash – didn’t stand out, either. Don’t get me wrong, I liked the book. But again, it didn’t wow me. It’s one of those that I enjoy in the moment but just doesn’t stick in my mind.

I think this book had fantastic potential. I do believe I’ll read book 2 when it comes out to see how it develops. :)