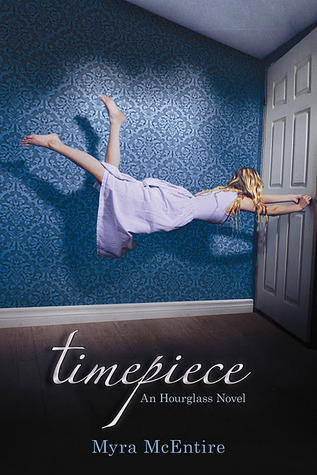 A threat from the past could destroy the future. And the clock is ticking...

Kaleb Ballard was never supposed to be able to see ripples - cracks in time. Are his powers expanding, or is something very wrong? Before he can find out, Jonathan landers, the man who tried to murder is father, reappears. Why is he back, and what, or whom, does he want?

In the wake of Landers' return, the Hourglass organization is given an ultimatum. Either they find Jack and the research he's stolen on the people who might carry the time gene, or time will be altered - with devastating results for the people Kaleb loves most.

Now Kaleb, Emerson, Michael, and the other Hourglass recruits have no choice but to use their unusual powers to find Landers. But where do they even start? And when? And even if they succeed, it may not be enough...

The present. Right now. The exact spot where the hourglass filters the sand from the future to the past. That’s where we have to live. Before all the sand runs out, or before somebody shakes it all up again.

Whew, man! This book was intense! I totally loved reading in Kaleb’s POV. I liked him from Hourglass, so I was looking forward to getting a more in-depth peek into his head.

In the beginning he’s kind of an asshat. He’s a player and a bit of an alcoholic. But as the book went on there was clear development – mainly due to Lily softening him. I loved this! Kaleb and Emerson had a bit of a thing in Hourglass, but he couldn’t have her because of Michael. I thought introducing a love interest between Kaleb and Lily was absolute awesomesauce.
Lily is fabulous, by the way. She’s so fiery and blunt! She gave Kaleb a run for his money. I loved the banter between them. It started off as borderline hatred (well, from Lily at least) then moved into something else. That’s my favorite kind of romance! It was so realistic and had that wonderful slow burn. I enjoyed it just as much as I did the romance between Em and Michael in Hourglass.
Jack is such a perfect villain. He was creepy and mysterious (even more so than the first book) and had his own disturbing agenda the he followed, no matter what the collateral damage was. He is the epitome of a villain: he’s demented and evil to the core with absolutely no redeeming qualities. McEntire did such a great job making him terrifying. I never knew what was in his head or what he was going to do next!
That ending killed me! It was a whammy of a cliffhanger that just filled my head with a million questions. Why? How? WHAT?! Ahhh! I can’t wait for a third book!
Favorite character: Gotta say Lily on this one. She kicked ass!

“What’s next? Blood-filled water? A plague of locusts?”
“Apocalyptical references?”
“I think I’ll classify you in the boils category.”
“Ow.”
“Okay,” she said, relenting, “Maybe frogs.”
“You know what happens when you kiss a frog, don’t you?”
“I think they pee.”

“Why haven’t you talked to her today?” Em demanded. “Why are you ignoring her?”
“I’m not ignoring her. Ow!” She grabbed a few leg hairs and pulled, and I was quickly reminded that tiny and irritable didn’t make the best combination. Especially when you poked it with a stick.