« Review: Daughter of Smoke and Bone by Laini Taylor
Review: Before I Fall by Lauren Oliver »
Posted by Jessi (Geo) on November 21, 2011 | 0 Comments 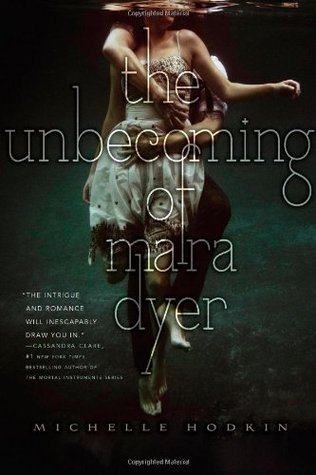 Mara Dyer doesn’t think life can get any stranger than waking up in a hospital with no memory of how she got there.

She believes there must be more to the accident she can’t remember that killed her friends and left her mysteriously unharmed.

She doesn’t believe that after everything she’s been through, she can fall in love.

When Mara’s friends die in an accident, she moves to Florida. I thought that was appropriate, considering I’m in Florida right now on vacation. Anyway, this book was pretty uneventful for the first 200 pages. A few PTSD hallucinations in the form of creepy dead people sightings here and there to keep you intrigued, that was about it. It’s mostly just Mara getting adjusted to life at a new school without her friends. After those 200 pages it picked up and got more interesting.

Mara’s first day of school. The first person she sees – lean, wearing Chucks, a loose tie, cuffs undone, blazer off, has gray eyes and messy dark hair. The mental image conjured by this description? Edward Cullen. My mental eyes were rolling. Then enter tall blonde and big blonde dude, perfect and flawlessly groomed. Anyone else picturing Rosalie and Emmett? I certainly was. Thankfully that’s the only thing that my mind automatically compared to Twilight.

I was pleased with the humor in the beginning, because it certainly needed it. That was what kept me going until it got more exciting. Quite a few times I found myself giggling, particularly her definition of “asscrown” – The crown on top of the asshat that covers the asshole of the assclown. The very zenith in the hierarchy of asses. Adding to the humor was Jamie – Mara’s first friend – whom I took a liking to immediately.

Enter Noah. Infuriating assclown.Frustratingly persistent. Mara makes it clear she’s not interested in him – she’s a total bitch to him and still he’s undeterred (he even said “you’re adorable.” I loved him for it. I love that kind of love story, where it starts off reluctantly. She tries to hate him, she really does. But she could only say no for so long, especially when the guy is nice and gentlemanly and hot to boot. Who wouldn’t want that?

She finally gives in to resistance and goes out on a date with him. I loved the banter between the two and found myself grinning like an idiot for the most part of their time spent together. I must say even I fell in love with Noah. Mara, on the other hand, I was thoroughly unimpressed by her. Other than an occasional quip, she didn’t have much of a personality. Although when she looks at Noah’s butt as he walks up the stairs I did feel a bit of a kinship with her ;)

I hated Anna. She was a bitch from the start and every time she came into the story I wanted to punch her in the face. I don’t think there’s ever been a character in a book I’ve read that made me so angry. I kinda liked it in a way, because there was a diversity of emotions. It was refreshing to have a character induce loathing instead of love for me as a reader.

The ending. Good lord, the ending. I finished the last line and my thoughts were…what the eff? WHAT…THE….EFF?! I just gaped at the page thinking, Why didn’t I see that coming???? View Spoiler »It was like the movie Ghost Ship (great movie, by the way) where she’s in the ambulance at the very end and she recognizes the dude and then it goes into slow-mo. I even had that Mudvayne song playing in my head. « Hide Spoiler It was crazy, man!

It took me a while to warm up to this book, but I loved the romance between Noah and Mara, and I have to admit – this book was freaky.

Plot: 3.5/5
Writing Style: 4/5
Humor will win me over any day.
Characters: 4/5
Those 4 are for Noah :)
Pace: 3/5
A little slow in the beginning.
Cover: 3/5
Interesting, but the guy’s arms bother me. There’s no way they can belong to the same person with the left one being so much higher than the right one. It irks me.