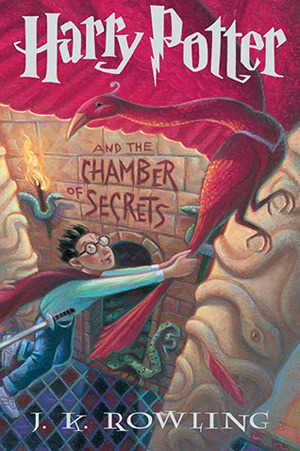 All Harry Potter wants is to get away from the Dursleys and go back to Hogwarts School for Witchcraft and Wizardry. But just as he's packing his bags, Harry receives a warning from a strange, impish creature named Dobby - who says that if Harry Potter returns to Hogwarts, disaster will strike.

And strike it does. For in Harry's second year at Hogwarts, fresh torments and horrors arise, including an outrageously stuck-up new professor, Gilderoy Lockheart, a spirit named Moaning Myrtle who haunts the girls' bathroom, and the unwanted attentions of Ron Weasley's younger sister, Ginny.

But each of these seem minor annoyances when the real trouble begins, and someone--or something--starts turning Hogwarts students to stone. Could it be Draco Malfoy, a more poisonous rival than ever? Could it possibly be Hagrid, whose mysterious past is finally told? Or could it be the one everyone at Hogwarts most suspects... Harry Potter himself.

I think this is probably my favorite of the series. I just love the underlying mystery, and the secrecy of the Chamber! This story is exciting from start to finish!

Just like the first one, I don’t feel like I gained very much from reading the book after already seeing the movie because it’s so similar. But I still thoroughly enjoyed it! I did notice a few minute differences – like, they left Peeves completely out! And the creepy weird dinner with the ghosts, I’d have liked to have seen that in the movie. Something else they left out of the movie was the students’ fear of Harry after all evidence started pointing toward him. I think that was vastly underplayed in the movie.

I don’t have much else to say about this other than I enjoyed it – it’s hard to be objective when you already know what’s going to happen! View Spoiler »Although I don’t think I would have figured out that Tom was using Jenny to do his dirty work, or that Tom Riddle is actually Voldemort. « Hide Spoiler J.K. Rowling has a way of making it so you never see her twists coming! I love that each book is just as unique as the last, and there’s not anything else like it.

“It is our choices, Harry, that show what we truly are, far more than our abilities.”

2 responses to “Mini Review: Harry Potter and the Chamber of Secrets by J.K. Rowling”

Leave a Reply to Rachel B Cancel reply