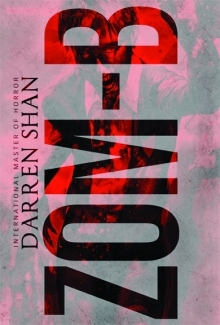 When news reports start appearing of a zombie outbreak in Ireland, B's racist father thinks it's a joke-- but even if it isn't, he figures, it's ok to lose a few Irish.
B doesn't fully buy into Dad's racism, but figures it's easier to go along with it than to risk the fights and abuse that will surely follow sticking up for Muslims, blacks, or immigrants. And when dodging his fists doesn't work, B doesn't hesitate to take the piss out of kids at school with a few slaps or cruel remarks.
That is, until zombies attack the school. B is forced on a mad dash through the serpentine corridors of high school, making allegiances with anyone with enough gall to fight off their pursuers.

Let me just say: This synopsis is NOT the one I read. If I had read this one, I probably wouldn’t have even bothered with this book.
Despite it’s short length, I didn’t actually read all of it. I made a valiant effort. Really, I did. But the lead character, B, was such a douchenozzle that I simply couldn’t go on. I usually don’t rate things I don’t read all of, but I think I read enough that I can, in all fairness, rate this one starfish. It pissed me off THAT much.

There was absolutely NO redeeming quality in B. He didn’t even have a sense of right and wrong, and his moral compass was nonexistent. Mainly because of his father, but still. He was cruel to anyone and everyone, and his attitude rubbed me the wrong way. He tried to buy beer (underage) from a gas station, then mouthed off and made fun of the Arabic guy manning the register when he denied the sale.
One of the teachers made a derogatory comment about B’s dad (which was actually founded in truth), so B went and slashed the guy’s tires and through a brick through his window. Um?

B pretended not to be racist, but he really was. He acted like he wasn’t so he wouldn’t be like his dad (who was an even bigger asshole than B).
B didn’t like Tyler – not because he was black (so he claimed), but because B stole money from him and he told his dad – ‘not keeping his mouth shut and putting up with the theft as any good victim should.’ What. The. Eff. And he took a candy bar right out of a girl’s hand, and thought she was wrong for getting upset about it. So not only was B a complete jackass, he was a bully, too. FABULOUS.

There was this scene where he was cruel and racist on purpose to piss of a black girl that stood up for Tyler, causing her to lose her temper and attack him. So what does B do? He punches her in the face. Wow, does that make you feel like a man? Hitting a female? Real f*cking classy, dude. View Spoiler »I know now that B is actually a girl, but it still doesn’t make it any better because of this: « Hide Spoiler Then he says, ‘I feel smug, because I know Dad would be proud if he could see me now, bringing an interfering black girl down a peg or two.’
That scene was the last straw for me, I couldn’t stand any more. I skipped to page 100, hoping that there would be some sort change in him, and landed right in yet another scene where B was picking a fight with Tyler. Nope, still an asshole. So I skimmed through the last 50 pages.

Sadly, I didn’t find anything better. Quite the contrary – it got worse. Whaaa? That’s even possible? Yep.
I spot a couple of teachers inside, chewing on the remains of their colleagues.
“They won’t be failing you again,” Dad says and we both laugh.
What the hell, man. Cuz it’s totally hilarious WHEN PEOPLE ARE F*CKING DYING. D-Y-I-N-G. Argh!! I wanted to throw the book at a wall.
Then – THEN – the zombies are overtaking their group, so B’s dad tells him to ‘Throw the bloody chimney sweep’ to the zombies to save themselves. WE’RE TALKING ABOUT A F*CKING PERSON HERE. And B actually did it! Seriously?! Then he blames it on his dad. Nevermind that it was HIS actions. ‘He turned me into a killer. He made me throw [said person] to the zombies.’  He didn’t make him do anything! All he did was tell B to do it, and B did it. B’s dad could have told him to jump off a cliff and he’d have done it with a smile on his face.

The realization that he was wrong did come, but only in the last several pages when it was too late. The ending was alright, I guess. He finally got what he deserved.

I felt as if this story was pointless. There was barely any zombies in the first half of the book. It was mostly high school crap, and B hanging out with his friends. There were way too many characters; they were all a giant blur of ridiculous nicknames and didn’t have their own personalities, so there was no chance for attachment to any of them. I couldn’t bring myself to give two shits about this story (probably mostly because I despised the main character).
This was my first Darren Shan story. Would I read anything else by him? Highly doubtful.

“Trust no one. Always question what you’re told. Don’t believe the lies that people feed you, even if they’re your teachers or parents. At the end of the day you have to work out for yourself what’s right or wrong.”
This is probably the only meaningful sentence in the entire book…and no it didn’t come from B (in case you were wondering). He wasn’t that deep.