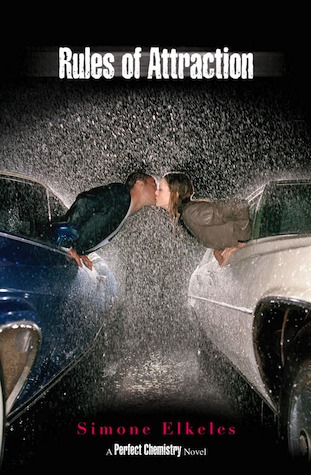 When Carlos Fuentes returns to America after living in Mexico for a year, he doesn’t want any part of the life his older brother, Alex, has laid out for him at a high school in Colorado. Carlos likes living his life on the edge and wants to carve his own path—just like Alex did. Then he meets Kiara Westford. She doesn’t talk much and is completely intimidated by Carlos’ wild ways. As they get to know one another, Carlos assumes Kiara thinks she’s too good for him, and refuses to admit that she might be getting to him. But he soon realizes that being himself is exactly what Kiara needs right now.

I adore love/hate romance stories. I really do. I loved this book! Not quite as much as I loved Perfect Chemistry, but it was still awesome!

Elkeles has a great talent for creating realistic characters. The POV switched back and forth, so as the reader I was able to get to know both Carlos and Kiara in depth. There was a clear change in voices and they had their own individual personalities. It was easy to tell where one person ended and another began, so they felt very convincing and real. The secondary characters were just as good as the main ones were. Kiara had a great family, and Tuck brought a lot of levity to the story.

The development was great, too – Carlos was a total prick in the beginning! He was childish and petty, cocky and surly – even worse than Alex was in the beginning of the first book. He was such a jackass at times that I wanted to reach in the book and slap him. And he was a player, too. But as he got to know Kiara, she started to change him. I enjoyed the glimpses into his softer side that she brought out.
I could see the change in Kiara as well as she gained confidence. She was a great lead female; I liked her and felt a connection with her. She was positive and didn’t let people get to her. Plus I really admire her patience. I think I would have lost mine if I had to deal with that boy’s massive pain-in-the-ass attitude!

I loved the romance; it was sweet and had the same slow burn that Perfect Chemistry did. The competition and banter between Carlos and Kiara was fantastic! There were plenty of complications thrown in for conflict, making for a bit of frustration in some points.

“Stop thinking about Michael,” Tuck tells me.
“He was cute.”
“So is a hairy ferret, but I wouldn’t want to date one.”

3 responses to “Review: Rules of Attraction by Simone Elkeles”