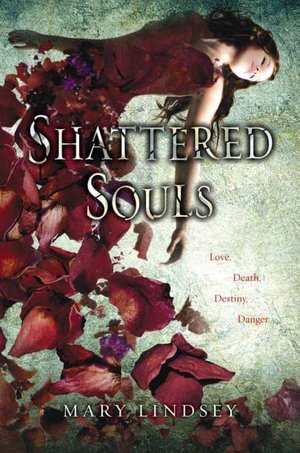 A thrilling debut story of death, love, destiny, and danger

Lenzi hears voices and has visions - gravestones, floods, a boy with steel gray eyes. Her boyfriend, Zak, can't help, and everything keeps getting louder and more intense. Then Lenzi meets Alden, the boy from her dreams, who reveals that she's a reincarnated Speaker - someone who can talk to and help lost souls - and that he has been her Protector for centuries.

Now Lenzi must choose between her life with Zak and the life she is destined to lead with Alden. But time is running out: a malevolent spirit is out to destroy Lenzi, and he will kill her if she doesn't make a decision soon.

I had a lot of mixed feelings about this book. While there were parts I liked, there were also parts I didn’t.
I loved that it started right off the bat with Lenzi hearing voices. It grabbed me right away and held my attention. What I didn’t enjoy was the love triangle. GROAN. I knew when I bought it that there was going to be one, but was hoping that the awesome story line would drown it out. Thankfully, it did (for the most part).
I didn’t really care for Lenzi much at first. She has this boyfriend that she thinks is awesome, and then this sexy new guy comes along and BAM! it’s instaluv. While I understand now why she was so drawn to Alden, I found it very irritating that she was jonesing over some guy she didn’t even know so quickly while she still had a boyfriend. If she wanted Alden and not Zak, she should have broken it off right away, and been mature about it instead of lying. But to her credit, when she finally did make the decision, she carried it out and kept it final.
Another thing I found annoying was the identity battle: Lenzi vs. Rose. Lenzi kept comparing herself to Rose and feeling inadequate. The first couple times were okay, but every chapter got a little annoying. But, on the other hand, I do understand how frustrating it would be for people to keep telling you that you’re someone you’re not.
As time went on, she grudgingly earned my respect. She turned out to be willful and independent, pursuing what she wanted and believed in.
The character development needed a lot of work. I couldn’t relate to the characters and didn’t feel their emotion. Even when the climax at the end came, I found myself rolling my eyes thinking, “Oh please, everything will be fine…so why is everyone getting so upset?!” I should have been shocked and outraged, but I felt nothing. I wasn’t satisfied with the romance, either. It just didn’t give me that gooey feeling.
Despite all that, I still enjoyed this book. It moved pretty quickly and the story was fresh and original. I liked the idea of Speakers (people who talk to ghosts) and Protectors (people who protect the Speakers and feel their emotions) working for the Intercessor Council to help the Hindered (lost souls with unfinished business) and Malevolent (evil lost souls) move on to the next life. Something I really found intriguing was the process of being ‘recycled’ – reincarnation to the next life. Cool, right?
This book was an easy and mostly enjoyable read, but didn’t go that extra mile it takes to really wow me. I just couldn’t get into it the way that I wanted to.