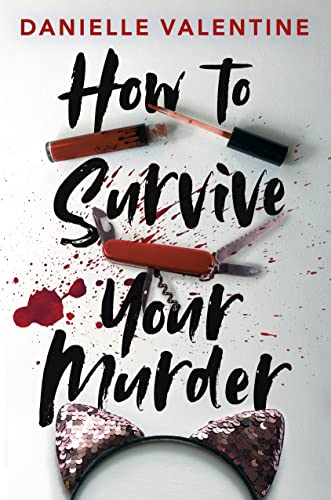 Alice Lawrence is the sole witness in her sister’s murder trial.

And in the year since Claire’s death, Alice’s life has completely fallen apart. Her parents have gotten divorced, she’s moved into an apartment that smells like bologna, and she is being forced to face her sister’s killer and a courtroom full of people who doubt what she saw in the corn maze a year prior.

Claire was an all-American girl, beautiful and bubbly, and a theater star. Alice was a nerd who dreamed of becoming a forensic pathologist and would rather stay at home to watch her favorite horror movies than party. Despite their differences, they were bonded by sisterhood and were each other’s best friends.

Until Claire was taken away from her.

On the first day of the murder trial, as Alice prepares to give her testimony, she is knocked out by a Sidney Prescott look-alike in the courthouse bathroom. When she wakes up, it is Halloween morning a year earlier, the same day Claire was murdered. Alice has until midnight to save her sister and find the real killer before he claims another victim.

I have no idea how to rate this because I still can’t decide if I loved it or hated it?? I vacillated pretty wildly back and forth at various points of the story. The beginning was rougghhhh. I almost DNFed this book because the first 20% is PAINFULLY, in-your-face high school. Almost like it was trying wayyy too hard to feel like high school. To the point that it was nauseating. It was shallow and juvenile, and I was starting to wonder if maybe I was too old for this book. I did a lot of 15-second skipping in the beginning, not gonna lie.

However, when it got to the whole Sidney Prescott scene where Alice goes back in time, to before the murder, everything changed. From that point on, I was hooked! It was a wild ride, to be honest. I knew from the beginning that Owen was innocent, that much was pretty clear. View Spoiler »I jumped back and forth to different suspects: first Wes, when he showed up right after a murder, until Alice started suspecting him immediately after; to her dad, as soon as she overheard the fight where her mom said “how many have there been?” and Alice assumed he’d been cheating (I really thought her mom found out he was a killer, and that’s what she meant, and that she was going to die)…but that one went away too as soon as she suspected him, because it was still too early in the book for a solid suspect. At one point it actually did cross my mind that it could be Claire herself, but then I thought, No, that’s silly, surely it wouldn’t be something that crazy. WELP, lmao. « Hide Spoiler So the actual killer was a pretty good twist, but I’m honestly not sure how I feel about it, which I’ll get to in a second.

For the most part, in the middle I really enjoyed it! I was super intrigued about the direction the book was going and wanted to know what was going to happen. At times I felt like the constant horror movie references were a bit over the top, like it was trying too hard. I mostly got tired of hearing “if this were a horror movie” and “in a horror movie, x/y/z” over and over and over again. I felt like that could have been dialed down a little bit. The narration was pretty good, too – in the beginning, her high school girl voice grated on my nerves, but in the more serious parts she was wonderful and really brought the book to life!

So, the identity of the killer. Hmm. I felt like it was a little bit wild and waaay out in left field. It was a good twist, for sure, but did it make sense? View Spoiler »I felt like Claire had no hints whatsoever to a psychotic personality. I could totally understand the motive behind killing the girls that her dad was cheating on her mom with, but the additional murders felt like too much for her personality. And she did it all for attention, basically? Just wow. I still am not thrilled about that, because I didn’t think it made much sense for her to suddenly kill a whole bunch of people willy-nilly just to be the “final girl” and center of attention. « Hide Spoiler

BUT. How about that ending!?! Did the author really go there with that ending?! OH YES SHE DID. And I have no idea how I feel about it. Did I love it? Hate it? I’m honestly not really sure! It will definitely be a controversial ending, and I think I’m leaning toward the love team because it was so unconventional of an ending. I love when authors do something that readers may not like, and even though open endings are frustrating, I also kind of love them because it leaves it ultimately up to the imagination.