« Undersea Spotlight: Nicole and Ashley at The Quiet Concert
Nators Discuss! Being the Black Sheep »
Posted by Jessi (Geo) on May 8, 2013 | 5 Comments The Last Academy by Anne Applegate
Published by Point (5.1.2013)
Buy from: Amazon | The Book Depository
Add to Goodreads 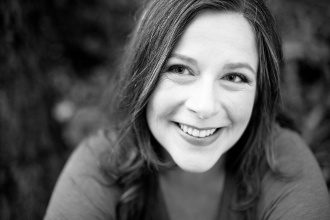 Anne Applegate was born in Chico, California.  Most of her childhood was spent moving across America with her family, nomad style.

When Anne was fourteen, her parents sent her to boarding school so she could spend four years in a single educational system.  As it turned out, her family then promptly settled into a small mid-western town and lived there for the next sixteen years.  Anne still hasn’t figured out if this means something.

After graduation, she went on to Tufts University in Medford, MA, where she had a wicked good time. Eventually, she  wound up back on the west coast, where she married a fantastic Californian guy.  Together, they have three children.

For the last twelve years, Anne has lived  in San Luis Obispo County.  This is by far the longest time she has stayed in any one place her whole life.  She immensely enjoys living  where 1) the sun always shines and 2) she isn’t the weirdest person in town.

“Go put on your suit.” Lia elbowed me, frowning at my lavender skirt and white T-shirt. The basketball guys had just dropped in – about eight of them, all wearing cutoffs. Lia’s other friends, Brooke and Grace, were decked out in jeans and tank tops. Lia was the only one in a swimsuit. A brand-new cherry-red bikini, and it showed off her tan perfectly.
I went over to the lawn chairs, grabbed my bag, and made an act of riffling through it. I knew what I’d find.
“I can’t believe I forgot to bring it,” I had to tell her a minute later. By then Lia was asking Hank from basketball which of the four city high schools he’d go to next year. The question sent a zing of excited nervousness through me. High school!
Lia rolled an unbelieving eye at me. I tried not to act guilty. I hadn’t forgotten my swimsuit. It was right where I’d left it. At home. The thing was, lately I’d been…well, developing like a Polaroid picture. When I’d tried my suit on that afternoon, it didn’t fit. My plan had been to wallflower it up by the onion dip while Lia flirted with Kevin, who hadn’t arrived yet.
“Camden,” Lia whined. She adjusted her bikini and heaved a sigh. “My yellow swimsuit’s in the dresser. Go put that on.”
I knew the yellow suit. One-piece, old, and ugly. Lia wore it for swim meets last year.
“I’m fine,” I said.
“Please,” she whispered, smiling nervously as Brooke and Grace walked over. “I’m the only one in a suit. Super please?”
Lia made puppy eyes at me that were impossible to resist. So I nodded, and she hugged me, and I trudged into the house. The sliding glass door closed on Lia’s laughter as the basketball guys threatened to throw each other into the pool.
When I finally found the yellow swimsuit, stuffed in the back of Lia’s dresser, it was uglier than I remembered. It was even worse on, making me look like a weird fried egg, my thighs the color of the white. I spent a few minutes telling myself how nervous Lia was, waiting for her crush to show up, standing around practically naked, by herself. It wouldn’t hurt me to look a little ugly for one stupid party. Then I told myself Lia would totally owe me.
On my way out, I stepped on a bag from Girl from Ipanema swimwear shop. When it crinkled under my foot, I could tell something was in there. Slowly, I pulled it out. It was a bikini, in a bunch of different shades of green. Lia must have bought two and decided last-minute on the red. That was so completely like her. Probably, with all the craziness of getting the party together, she’d forgotten to mention it. I held it up in the mirror. Thing was scandalous pretty. I tried it on.
I actually look good, I thought, shocked as I twisted and turned in front of the mirror. Unlike my swimsuit at home, this fit me perfectly. I mean, I didn’t even look like myself. And since my other option was fried egg…
I walked back to the party. At the sliding glass door, I had to do a little happy dance for my BFF – Kevin had arrived. He stood with Lia, right next to the Jacuzzi. He slouched as she talked, his hands in his jeans pockets, tossing his head every few minutes to get his glossy brown hair out of his eyes.
The underwater lights for the pool were on, and the sky was twilight. Hank peeled off his shirt, cannonballed into the water, and came back up, laughing. One of his buddies dove in after, and Grace laughed. Out of nowhere, Hank caught my eye and smiled at me. Completely giddy, I sort of pranced down the path toward Lia.
“Whaddaya think?” I asked, pointing at the suit and laughing. I thought Lia’d laugh, too. Instead, Kevin let out a low whistle.
“Whoa there. Niiiii-ce,” he said, checking me out. I blushed, embarrassed by his tone. I didn’t know what Lia saw in him. “You are smoking hot.” He grabbed my hand and spun me like we were dancing. I heard myself giggle, but I could see Lia’s face going red. I was messing up her plan. Worse, I was hurting her somehow. I pulled my hand away.
“That’s not the yellow suit,” she said. “It’s my brand new one.”
Brooke came over. “Isn’t that Lia’s new suit?” she asked, which made me mad, because Brooke was just saying it because Lia had said it. My best friend flashed the fakest smile I’d ever seen. It hit me like a ton of bricks: She hadn’t forgotten about the green bikini at all. She’d wanted me to look ugly.
I stood there, tensed up, meeting Lia’s eye. Then Kevin broke the silence.
“Whatever,” he said. “This party sucks. Wanna get out of here, Camden?”
That’s when Lia said, “No. She’s gonna go swimming.”
She smacked my chest, knocking the wind out of me. As my feet left the ground, I saw the first star, winking in the sky. And then I was in the Jacuzzi, getting water up my nose. My butt smacked the concrete seat, and I swirled down through the bubbles. Up there, they laughed at me. And right in that moment, I never wanted to be friends with Lia again.

[PnRC] November is for Shifters: Link Your Reviews!